'The Hardest Thing About Being A Translator Is Getting Paid' 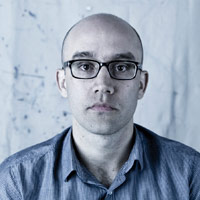 08 November, 2014
Print this article Font size -16+
Tell us your experience as co-translator of this book. And how long did you take to complete the project?
If you can believe it, I started translating this book in 2003 when I was living in South Korea. I finished my first draft three years later. I took this project on because I like Manto, I wanted to translate him, and I thought I saw a way of presenting him in a new light. But my motivation was also to reconnect with Aftab Ahmad, my co-translator and, in 2002, my Urdu teacher in Lucknow. Once I got back to the US in 2006, the odyssey of finding a publisher began.
What according to you were setbacks or hurdles while working on the translation? What's the hardest thing about being a writer/translator?
Each book has a learning curve; part of that comes in how translating a book is not just translating words but also translating the cultural milieu of the book. Fortunately, I can’t think of many more interesting places than Bombay in the 1940s, so all that I did in terms of background research was very enjoyable.
Finding a publisher with a similar vision for the work was challenging. I am lucky that I connected with Random House and with the editors I worked with, Meru Gokhale and Archana Shankar.
I would say the hardest thing about being a translator is getting paid. That might sound crass, but especially in the US with under-represented literatures like Urdu, there is a struggle to convince publishers that the work is important enough that the work should be published and the translator paid.
One discovers after reading your introduction and the book that some aspects of Manto's Bombay still apply to the city now. Structurally every story set in Bombay/Mumbai will perhaps go through similar narratives. Your comments...
Certainly there is continuity between Bombay and Mumbai. The old Bombay has not been totally effaced. At the same time, there are numerous accounts of changes in the ethos of the city through the decades between Manto’s time there — the 30s and 40s — and today: changes due to the end of colonial rule, new social politics, and the onslaught of full-on capitalism.
While reading Manto's works or during the course of this project, did you find it tough to get into the mindset of the author?
Not really! I would like to meet someone who has a hard time getting into Manto; I haven’t met one yet!
Is the experience the same with all translated works or was it different with Bombay Stories?
I am in the midst of a handful of big translation projects. Bombay Stories will always be my first book of translations. That said, each project has its own history, gives rise to its own experiences, and the different texts are so unique that it’s not hard to think of each project as having its own life.
Did you visit Mumbai before taking up this project? If yes, tell us about the places you visited here...
My longest time in Mumbai was in 1998 when I lived for a month in Nagpara. I lived in a dingy hotel room, not much wider than two single beds (there was only one bed in the room, of course). My tiny window gave onto a corrugated iron roof where a one-eyed cat lived. I got meals from a family I got to know — relatives of a friend of sorts from Agra. At the time, I was interested in the shehnai; I took lessons at a temple in the area. I have lost track of exactly where the temple was, I’m sorry to say. The next time I visit the city, I’ll want to find it. Maybe I can finally get the shehnai they owe me!
Comment: If Manto was a writer in today's Mumbai, what would he write on?
That’s a hard question to answer. Maybe he’d just go to Delhi. But if he were in Mumbai, he might write on the lives of the people working in malls. He had an eye for identifying sensitive subjects, and what’s more sensitive than the unapologetic way capital has of transforming society and leaving certain people lost in its wake? Then again, he loved to write about all sorts of human hypocrisy, and no place is ever short on that.
Do tell us about your other works? What are you working on at the moment?
I am strangely superstitious about mentioning things in the pipeline, but I can tell you that our translations of Manto’s Letters To Uncle Sam, written while he lived in Pakistan, are done. I won PEN Foundation and National Endowment of the Arts grants this year to translate Mushtaq Ahmad Yousufi’s Mirages Of The Mind (Aab-e-gum) and Paigham Afaqui’s The House (Makaan), respectively. I have also just published a translation of one story of the 'Hyena Trilogy' by Sayyid Muhummad Ashraf.

Your reading habits... what are you reading now?
I like to read a lot of books at once — and with seeming indiscretion and abandon. Of course, I am reading the books I am translating. Otherwise, I am reading many genres — contemporary American poetry, a new book on Dalit literature, a book on translation theory and the arts, and Mohammed Hanif’s Our Lady of Alice Bhatti.
E-books or printed paper format?
I am definitely a print culture man!
businessworldbooks (at) gmail (dot) com
Tags assigned to this article:
books sanjitha rao chaini mumbai random house random house india authors corner urdu bombay matt reeck translations saadat hasan manto bombay stories languages aftab ahmad