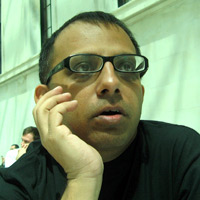 08 November, 2014
Print this article Font size -16+
Why this book? How did the idea of translating this book come to you?
I read about the book in the Book Discussions section of the Ananda Bazar Patrika and put it on a shortlist I have titled 'Books to Read for Possible Translation'. Once I bought the book and dipped into it, I was determined to translate it. It was like listening to a new piece of music that you instantly want to sing.

Manto or Ghalib? And why?
Right now, Manto. The times are crying out for the truth to be told — Manto told the truth like few people can.

Did you interact with Rabishankar Bal during the course of translating this book? Tell us about it?
Yes, in order to check on certain specific references and meanings. That apart, just to chat and get to know him — I really wanted to know a man who could have written a book like Dozakhnama. But I still haven't discovered the magic of how he did it. In fact, I don't really want to know, the magic is so wonderful.

Q: Bal's next novel is based on the life of the Sufi poet Jalaluddin Rumi, and told through the imagined eyes of Ibn Batuta. Will you be translating this?
I hope so. I hope Dozakhnama proves popular enough for a publisher to be interested in the Rumi novel.

Most publishers translate classics (when the original authors are long gone out of radar/or even dead). Do you think this trend is changing at the moment?
Actually, even without abandoning the classics, publishers are looking strongly at contemporary fiction in the Indian languages for translation now. They are quite hungry now for modern writing in translation.
We still don't have a good translation eco system in place in publishing, considering we have rich regional language writers. Do you agree? How can we change this?
Yes, I couldn't agree more. If publishers demand more translations, a supply-chain will spring up automatically. But an eco system is another matter — workshops, training, courses, awards and so on. Those will emerge only if translating becomes a reasonably lucrative profession. But for publishers to publish more translations, there will have to be demand. The one thing that can generate such demand is the teaching of Indian literature in translations in schools and colleges. If young people became familiar with Indian fiction in translation in school and college, they would probably want to read more of them - kicking off a virtuous cycle.

How difficult or different was it to translate this book compared to other works you have translated before?
Well-written books are always easier to translate because of the sheer quality of the writing. In that sense, Dozakhnama was one of the easiest. Also, despite its subject being historical, the prose is modern, which, too, made translating easier. However, the copious amounts of poetry in the novel presented their own challenges.

Do you have a collection of dictionaries for the translations you work on? In general, do you talk to people who are experts in the language you translate from, in this case Bengali?
No, I have two — one Bengali-to-English, and the other, Bengali-to-Bengali. I do consult people sometimes to catch references or discuss the specific usage of words and phrases.

When and where do you write?
I try to write for two or three hours every night after dinner. And as many hours as possible on weekends and holidays. But I will also translate if I get a 10-minute break between tasks. Translating doesn't always mean writing - it could be some dictionary work, or revision, or even re-reading a text. I can — and do — write wherever I can: at my desk at home, on the bed, on a sofa, in a cafe, on a flight, in a hotel room. I write both on a Macbook Air and on an iPad, depending on how much space I actually have available. Sometimes I scan the text up or get a PDF and keep it open on a screen on my computer. When I do that, I use xPad and not Word. In short, I write anytime, anywhere, any which way.

What’s your energy drink?
Coffee. Sometimes, when it's very hot, a cola.

What's the hardest thing about being a writer/translator?
For a translator, the hardest thing is to switch voices from one book to another, if you happen to be working on more than one book at the same time. I do that quite often — not just in terms of the original writing, but also responding to copy-edits and, if necessary, reading proofs (which, to be honest, I almost never do.)

What are you reading now?
In Bengali, a novel named Malabkaushik, which is about the Raga Malkosh. It's fiction. In English, Tahmima Anam's The Good Muslim and  Tom Wolfe's Back To Blood. And a couple of graphic novels.

E-books or paper format?
I am secular. Sometimes I read a book in both paper and e-formats, whichever is convenient at a particular time. I'll read anything when I have to - even a leaflet or a packet.