New Delhi [India], January 19 (ANI): 'Tandav' creator Ali Abbas Zafar on Tuesday revealed that the cast and crew of the show has decided to implement changes in the Amazon Prime Video-based series in order to address the backlash against its content that has hurt religious sentiments of many viewers.
Zafar shared an official statement from the cast and crew of 'Tandav' on Twitter and reiterated that the team had no intentions to hurt or offend the sentiments of any caste, race, community or religion.
"We have utmost respect for the sentiments of the people of our country. We did not intend to hurt or offend the sentiments of any individual, caste, community, race, religion or religious beliefs or insult or outrage any institution, political party or person, living or dead," the statement read.
"The cast and crew of Tandav have made the decision to implement changes to the web series to address the concerns raised towards the same," the statement further read.
The team also thanked the Ministry of Information and Broadcasting for guiding and supporting them in the matter. 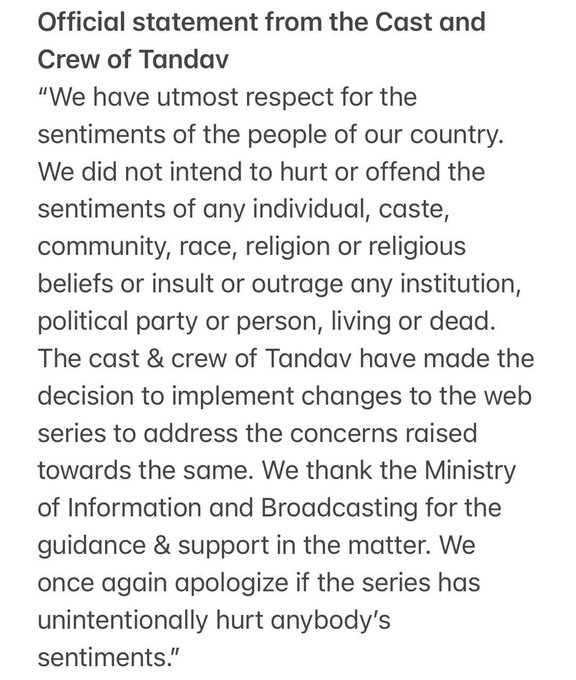 "We thank the Ministry of Information and Broadcasting for guidance and support in the matter. We once again apologise if the series has unintentionally hurt anybody's sentiments," the official statement read.
Earlier on Monday, the cast and crew of the Saif Ali Khan starrer political-drama had extended their apologies to the viewers for "unintentionally" hurting their sentiments.
An FIR was registered at Lucknow's Hazratganj Kotwali against Amazon Prime's India head of original content Aparna Purohit, Zafar, producer of the show Himanshu Krishna Mehra, writer Gaurav Solanki and others for allegedly hurting religious sentiments on Monday. (ANI)