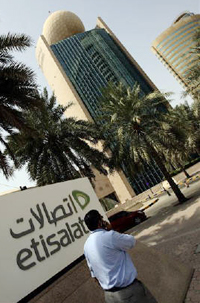 However, it would apply for the equipment, which is not hypothecated to banks, said the TDSAT.

"We are of the opinion that interest of justice will be sub-served if in respect of the equipments of the Etisalat DB, which are in possession and control of the RInfra in terms of the agreement, it is restrained from interfering with the possession or transferring the said equipments," TDSAT said.

One Viom Network has already taken Etislat DB before the Delhi High Court and Standard Chartered Bank, which is a secured creditor, has approached the Debt Recovery Tribunal.

Moreover, an application for winding up has also been filed at the Bombay High Court by Etisalat Mauritius Ltd to liquidate Etisalat DB.

The DRT has already appointed a receiver to take the possession of Etisalat DB's inventory.

However, in its order TDSAT has said that if the DRT asks receiver to take possession of the equipment installed on RInfra towers, "it must give access to the Receiver with regard thereto".

Etisalat DB, a JV between UAE-based telecom major Etisalat and DB group, had entered into an agreement with the RInfra for sharing telecom infrastructure on a 10-year lease in 2009.

However, following the recent Supreme Court decision cancelling the licences of Etisalat along with other new entrants, RInfra moved TDSAT for recovery of its dues.

TDSAT's directions came over a petition filed by RInfra against Etisalat DB claiming Rs 1,270 crore in dues for the use of its telecom infrastructure.