‘Storage Is The Fastest Growing Segment’ 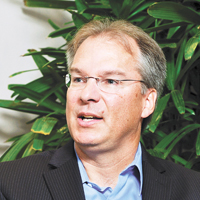 But many large, integrated players are buying up standalone storage firms. NetApp is routinely mentioned as one such candidate for the likes of an Oracle or an HP.
We are a listed entity. Somebody will have to write a really large cheque if they are that keen on having us. Anyway, that is for the board to decide. Because of that (apprehe-nsion of a likely acquisition), we have never had a discussion with a customer related to that. Assuming even that happens, they would have to perpetuate our products. My message to the team is that we could either be a poorly managed company, which nobody wants to buy, or we do such a good job that we become very attractive and expensive to buy. Even for the companies you mentioned, if they have to do it, it would be a very significant transaction.

Is that why you have been bulking up, having made three key buys last year, a poison pill strategy to prevent a hostile take-over? What are the areas you want to buy?
The acquisitions are to further our growth and as part of a long-term plan to drive valuations. Definitely not to make ourselves less attractive. The (poison pill) arrangements are considered shareholder- unfriendly and difficult to implement. In most (such) cases, courts are likely to strike them down. I would rather focus on execution and ensuring that we deliver on our promise. I do not want to drive up the price of potential (acquisitions) by naming them. But broadly, we would be interested in manageability tools, indexing, archiving and search.

The new buzzword in the storage indu-stry is Big Data. Tell us a bit about it.
That means a lot of things. We look at it in three elements: analytics, bandwidth and content — the ABC of the storage industry, which is increasingly driving growth. In analytics, the question is how do I assemble data from disparate sources, bring them in one place, use parallel computing to gain business intelligence, which is actionable. It is very data intensive. I consider the work we do around big bandwidth, high-performance computing and video as another element of Big Data.

The content could be medical records, YouTube videos, insurance claims or trading records at a financial services firm. Every company has massive archival capabilities around the data they handle. Since there is no single solution, I worry about Big Data a lot. The attributes and nature of solutions around the three vectors are different. We expect to be a technology leader in all of them.

India's storage market is growing fast. But it is still on a small base. How do you see this evolving and how important are NetApp India operations to the global play?
The market is still small compared to some of the developed ones, but this is an opportunity to shape a population of billion people. Since there are no legacy investments, the opportunity to introduce new interesting technologies is that much more.

India is our second-biggest location. We have 2,000 employees out here. Last year, we did more (over 100) invention disclosures (patent filings) from the Bangalore facility than we did from any of our facilities across the globe. Our relationship with Indian multinationals such as Infosys, Wipro, HCL and Cognizant matter both globally, and increasingly in the Indian market, too. We are not doing support or irrelevant projects here. The success of NetApp globally hinges on the work being done from here. On most of our products we sell across the world, there would be some work, some interface done by our India operations. Both from our R&D perspective and as a market, India is very important to us.