The concept of Smart Cities should not be limited to cities and India's villages and small towns should be covered under it, say top executives at BW Businessworld' Smart Cities Conclave and Awards 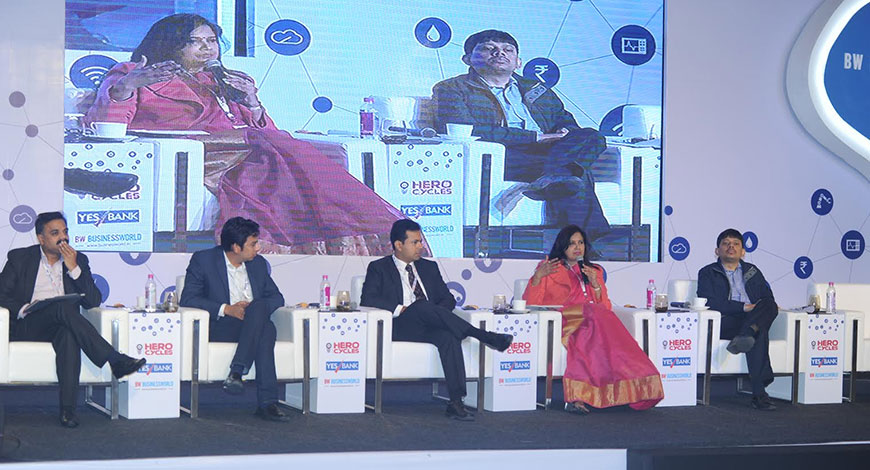 21 December, 2016
Print this article Font size -16+
The mission of developing smart cities in India should be a national goal and must not depend on which party is in power in New Delhi, an industry expert said.

"I will use an analogy here to explain how Indian policy makers are dealing with the approach of building smart cities. It's like throwing a complex puzzle at an unsuspecting confused man," she said.

"If I had to name one reform that we require to make, then the mother of reforms will be to build capacity - capacity of cities and our leaders."

She cited the CEO of NITI Aayog as one such inspired leader who is constantly learning, adapting and trying to understand and stay abreast of all technological advancements that can help the country.

Even Uber's Travis Kalanick feels the same way, as can be deduced from his TV interview with the NITI Aayog CEO.

Gautam Balakrishnan, vice president and head of Smart Cities at Tata Projects Limited, speaking on what needs to change apart from tactical payment delays, said the state has tried to plug these gaps by hiring smart city consultants from around the world. Pune and Vishakhapatnam have benefitted from their counsel, he said.

Gopal responded to Balakrishnan's comment about smart city consultants by saying that India smart cities should be made capable of managing themselves without the foreign consultants who help set them up.

An even bigger reform will be to decouple infrastructure cycles and political cycles so that smart city advancements won't be hampered or dependent on the current politicos in power.

On why the reforms are so slow to be implemented, Balakrishnan said, "I'll have to go on a limb and say lack of courage, tenders of deserving companies never seeing the light of day and those responsible not taking their tenures seriously, are the reasons."

The Smart Cities concept shouldn't be just limited to cities, the experts said. Smart rural villages and towns are also a possibility if the government wants to end development disparity.

The word smart merely refers to a community enabled by technology even though it has only a few people living in it. Even smart solutions for agriculture can make sweeping changes, the expert said.

"Smart Cities is actually making life more organised and the result of implementing a smart city concept is to make operations of a community simple. So let's forget about complicated RFPs from uninformed policymakers. Even something adopting remote monitoring of an agricultural land is enough to make a smart city," one speaker said.

"Let's get more Indian youth interested and engaged in starting up IoT related companies. Let's start encouraging an op-ex business model now possible by cloud technology; why wouldn't you move to cloud servers instead of spending so much of your capital on hosting such physical infrastructure? That's how you build a smart city, starting with smart citizens," he said.

Pranay Jivrajka, chief operating officer at Ola Cabs, brought the discussion full circle by saying that collaboration of the private players and the government players should increase to advance India to technologically state of being.

According to him, private players should do more innovation and leading the way to improve collaboration with the policy makers.

"Smart city is a longer term goal, what's important is that everyone is on the same page and all stakeholders know we are all in it together, we need more courage, more understanding and have a close ear to the ground to know what changes are coming and should be made. Private players should chip in more."
Tags assigned to this article:
BW Smart Cities Conclave and Awards 2016 Smart Cities Mission travis kalanick gautam balakrishnan

TradeSmart Releases Trading Report FY22 With 57% Rise In Customer Base