New Delhi [India], December 29 (ANI): Sending out Tuesday motivation, Bollywood actor Shilpa Shetty shared an inspirational message for fans in her latest post.
One of the fittest celebrities in Bollywood, Shetty leaves no stones unturned to inspire her fans with her motivational messages. Plugging with the same, the 'Dhadkan' star shared a tip to strengthen will power in her latest post on Instagram.
The picture that shows the 45-year-old star flaunting her well-built abs, reads '#ShilpaKaMantra You've got what it takes, but it will take everything you got'.
Channeling hopefulness, the star wrote, "If you've ever doubted yourself & wondered, whether or not you're capable of doing something... let me tell you, you're not alone," in the caption, alongside the picture. 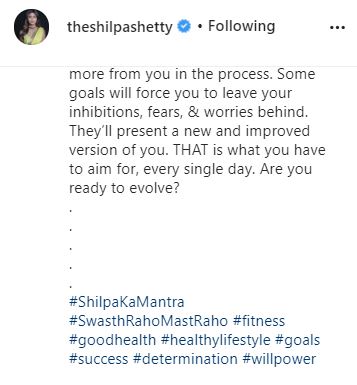 "However, I want you to know that each one of us is built strong enough to achieve whatever we set out to do. But, some things will just demand a lot more from you in the process," Shetty further noted.
Emphasising the need for evolution, the 'Life in a metro' star added, "Some goals will force you to leave your inhibitions, fears & worries behind. They'll present a new and improved version of you. THAT is what you have to aim for, every single day. Are you ready to evolve?"
Shetty, who is very active on her social media accounts, updates her fans regularly about her activities. On the work front, she will soon be seen in 'Hungama 2' the sequel to the 2003 blockbuster comedy-drama 'Hungama' and in the Sabbir Khan directorial 'Nikamma'. (ANI)