Mumbai (Maharashtra) [India], Aug 29 (ANI): On the issue of Punjab and Maharashtra Cooperative (PMC) Bank scam, Bollywood actor Ranvir Shorey on Friday expressed concern over the depositors whose hard-earned money and life savings are stuck and alleged inaction by the authorities.
The actor has highlighted the problems of PMC Bank depositors, who are facing a grave financial crisis as they are deprived of their entire life savings being stuck with the bank. The actor also claimed that because of the scam 'more than 9 lakh people are destroyed.' 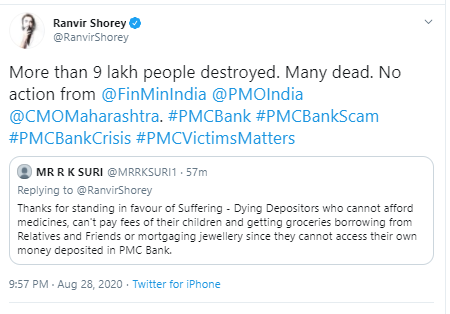 The 'Lootcase' actor took to Twitter and highlighted that "More than 9 lakh people destroyed. Many dead. No action from @FinMinIndia@PMOIndia@CMOMaharashtra. #PMCBank #PMCBankScam #PMCBankCrisis #PMCVictimsMatters." The actor tagged the Ministry of Finance, the Prime Minister's Office, and the Office of the Chief Minister of Maharashtra in the post.
Earlier on Tuesday, the 'Angrezi Medium' actor stood up for the depositors who have suffered because of the PPM Bank scam and wrote on Twitter, "If you want to study how #India gets fleeced by its politicians, study the #PMCBankScam. It's a textbook case. And don't miss the media's role in brushing it under the carpet. #PMCVictimsMatter."
In response to the tweet, one of the Twitter users thanked the actor for raising his voice and said, "Thanks for standing in favour of Suffering - Dying Depositors who cannot afford medicines, can't pay fees of their children and getting groceries borrowing from Relatives and Friends or mortgaging jewellery since they cannot access their own money deposited in PMC Bank.."
In September last year, the RBI had capped the deposit withdrawal limit at Rs 40,000 and restricted the activities of the PMC Bank after an alleged fraud of Rs 4,355 crore came to light. The Enforcement Directorate (ED) has seized and identified movable and immovable assets worth more than Rs 3,830 crore owned by HDIL in connection with the case. (ANI)