'More Pixels In Your Life' 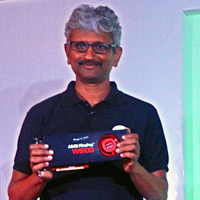 08 November, 2014
Print this article Font size -16+
What kind of impact will your newly launched graphics cards (W8100 and W9100) have on Indian VFX industry?
The new graphics cards are aimed primarily at the professional folks. The hardware and the software that goes with it is going to make Indian producation pipeline much more faster and smoother. Instead of relying on 10-20 computers in your render farm, now you can do it with just one computer.
AMD is helping the Telegu film industry with the VFX. Are you also working with Bollywood directors?
Yes, we are.
We have done quite a bit of work with Prana. We worked with them and got their pipeline accelerated. We found the problems that they had with our Firepro series of cards and enabled them to use them the right way. We struck a deal with them and sold a good chunk of the cards.
We are kind of slowly expanding and trying to insert ourselves into the whole production pipeline. You will see AMD collaborating with more number of film-makers.
Will you be setting up a studio in Bollywood as well?
I personally encouraged the formation of Makuta and advised the board of technical directors to which kind of technolgy they should use. I am quite passionat about the VFX industry in India and you will see me encouraging ang participating in it a bit more in the years to come.
The Indian movies are made on one-tenth of the budget of prominent Hollywood movies. What kind of cost cutting and constraints are involved?
I think that is where huge opportunity lies. Since the budget is limited, you need to find a very efficient way to do the rendering. That's where utilising the GPUs is a lot more cost effective, faster and much more efficient. But you need to adopt new software and that is where Indian industry is more capable in doing that versus Hollywood which is not short on money and doesn't require to put in the hardwork to take out time and try out something new.
Given the poor infrastructure, do you see Cloud Gaming becoming a reality in India?
I see several ways in which Cloud Gaming will take off in India. One is the personal/enterprise clouds where you put all your machines in the back-room and give the users access on a tablet or notebook; such a LAN environment provides a better control over latency. This arrangement will easily take-off as I will be able to serve 100 gamers with ten computers. With the virtualisation technology that AMD has, you can share a computer to run many games simultaneoulsy.
Once DirectX 12 arrives, what will happen to the Mantle engine?
A DX 12 solves some of the problems that Mantle solves and that's great, we will have great support for DX 12 and will encourage people to go there. We will continue to innovate in Mantle and solve other problems. We are working with the developers to take advantage of the GCN architecture that has many features that aren't exposed to DX 12.
Would this innovation make photo realistic rendering possible?
It depends on the compute capabilities of the GPU and we are at 5 Teraflops right now hich is fairly impressive. We are also making a programming model for the GPU much more robust and simpler. I think combination of these two aspects will enable realistic rendering rendering in the next two to three years.
Any plans to foray into the mobile/tablet segment?
We work with partners who do vertical integration and we are working with them to get into the interesting tablet segment. We can't reveal our partner's plans but yes, we do have a strategy.
AMD's share in the commercial PC market is still quiet low. Any plans to ramp it up?
Yes, definitely. It is in our list of priorities of this year and the next year. We are working on some initiatives and some upgrades to our processors and software. Software is a big part of winning the commercial space.
Recently HP launched their Gen9 Servers in India. Earlier generations made use of both the processors: AMD as well as Intel but Gen9 is completely based on Intel Haswell processor. What's going on?
HP is a super-close partner of AMD, probably the number one OEM partner. They have their own product cycle and if our silicon doesn't line up with it, they have to do what they got to do.
They have another product cycle that will come and they will make other set of choice!
Moving ahead, apart from gaming, what will be the major area you wil be focussing on: mobile, commercial PCs or the enterprise segment?
We need to have good products across all these segments; will be interesting for us. However, our focus would still be basically on how do we solve problems for users in visual computing. There are still plenty of problems on generating good pictures for commercial, good pictures for consumer and good pictures for visual rendering.
Tags assigned to this article:
banking news 7 epfo k k jalan uan ifsc