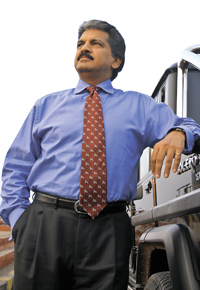 It has been just over nine months since Tech Mahindra took charge of fraud-hit Satyam Computer Services after the government dethroned the board led by B. Ramalinga Raju and auctioned the company to Anand Mahindra’s technology firm. Having remained quiet since the takeover, Anand Mahindra, vice-chairman and managing director of the Mahindra Group, broke his silence in an interview with BW’s Kandula Subramaniam. He candidly explains why he bought the information technology major, what he plans to do with the company and, what he is doing to reassure Satyam’s employees, clients and creditors that their business is in safe hands. Excerpts:

Coming straight to the point, why did you choose to bid for Satyam Computer, especially since it carries so much of baggage?
It was two years ago that the board of Tech Mahindra decided to broad-base the company’s operations. The company had, for many years, enjoyed double-digit growth in the telecom space that was its core area of expertise. One way to do broad-based operations was inorganic growth. In fact, it was around the same time (when there was speculation of Satyam being eyed by investors) that I had approached Raju. But at that point, he was not very forthcoming. I even approached him last year (after Maytas acquisition attempt), but it all seemed very opaque, there seemed no clarity. But if you see the two companies, there were obvious complementarities… for instance, we were dealing in sterling pounds and they in dollars… our competence in telecom was not their area of strength.
What about the ‘tainted company’ image? Wasn’t that a big concern when you considered bidding?
On the issue of image, buying a ‘tainted company’, as you put it, I would like to say that external image in a software business plays a very different role than, say, in consumer or lifestyle businesses. In software or IT (information technology) sector, your customer’s perception is based on tangibles such as delivery.
The government had already done a good job (after Raju’s disclosure) of moving in fast and replacing the board and removing the ‘taint’, so to speak. And during our process of due diligence, we realised that the problem (or scam) was not deep rooted. We asked ourselves questions, very fundamental questions, such as: ‘Is this a REAL company? Are there REAL customers?’… The answer to these questions was that Raju had in fact built a company with competent solutions and delivery mechanisms. It was corporate governance that was missing.
Now, we know you can’t change a tainted image with full-page advertisements. We knew we would bring to bear a 64-year-old reputation for integrity that would be more effective in doing that. And we would retain that image by having everyone — from the top man down — walk the talk on governance and integrity.
The company was losing clients. It was losing business. What were the first steps you had planned? What was the message you wanted to send out? Personally, how did you see the situation (pre-acquisition)? What were your thoughts?
The only thing that went through my mind after we won, was, “This is a huge responsibility.” Taking over a company that had been in the global limelight and where India’s reputation was at stake, requires a strong sense of responsibility. For me, taking over Satyam is not akin to “win some, lose some”. If I have to spend the rest of my life turning it around, I am prepared to do that.
However, it is not as though we did not have a plan going in. It was not that once we won the bid, we scratched our heads and said, “Okay, what do we do next?” When we took over the company, Vineet (Nayyar) and CP (C.P. Gurnani) already had a road map of what to do from day one. We were like commandos hitting the ground with a battle plan. The key message was: the past is, by definition, gone, so let’s pick up the pieces — the good ones —and start running.
I had had personal conversations with some of their clients before bidding for Satyam. And their feedback was very positive. They confirmed this was a company with a real business model and they were very satisfied with the customer centricity of the Satyam team relative to their competitors. As I said earlier, our information was that the problem was not deep rooted.
And what are your plans?
Given this (scenario), to initially re-ignite Satyam we had a simple twofold strategy. First, the corporate governance gap had to be plugged. We would do that by walking the talk. Second, and equally important, was to adopt a profit-centric approach to businesses. This approach was lacking, which was evident from the accounts. In short, while the services of Satyam were of extraordinarily high quality (as the clients have testified), we had to ensure that this was sustained.
The earlier regime also had codes on whistle blowing and corporate governance. How different would you be in terms of, say, SOX compliance (SOX refers to the corporate governance and financial disclosure standards mandated by the US federal legislation Sarbanes-Oxley Act of 2002)?
In terms of SOX, we will comply 100 per cent. This cannot be by perception alone because apparently even the previous regime was perceived to be doing this (had corporate governance codes)!
How much time do you devote to rebuilding Satyam and the business? What is your long-term vision for the company in terms of milestones?
During the first few months of the acquisition — unlike my usual practice — I spent a disproportionately large part of my time on the company (Satyam) than on any other sector… but then this (time devoted) came down as we have a great team in place.
However, this team is smart enough to lay first claim on my time when I travel abroad. In fact, when I went to Singapore recently, 80 per cent of my time was spent on Satyam clients. When I visit Davos for the World Economic Forum meet later this month, I will be accompanied by Vineet (Nayyar), Sanjay (Kalra) and CP (Gurnani). This is a clear departure from what I did earlier. In the past, I have always gone alone.
Do you feel the past is behind you? Have things changed?
For me, it would be premature to declare victory!
(This story was published in Businessworld Issue Dated 18-01-2010)
Tags assigned to this article:
magazine it mahindra satyam anand mahindra b ramalinga raju kandula subramaniam mahindra group maytas