New Delhi [India], August 1 (ANI): Vidya Balan's latest movie 'Shakuntala Devi' has been receiving positive reviews since its release. Joining the clan now is actor Sushmita Sen, who on Saturday appreciated Balan and the entire team of the flick for their wonderful work.
Helmed by Anu Menon, the movie was released on July 31 on Amazon Prime and saw the 'Parineeta' actor portraying the role of the real mathematical genius Shakuntala Devi who was known for solving even the most complex mathematical problems within seconds.
Upon the movie release, the former Miss Universe, Sen poured in appreciation for Balan's performance as Shakuntala Devi and dubbed her as a true "genius". She also further congratulated the director and the entire team for making the movie this wonderfully.
I laughed, I sobbed & basically fell in love with the journey of #ShakuntalaDevi. A brilliant film!! Take a bow @vidya_balanyou truly are a #Genius what a performance!!," the 'Main Hoon Na' actor tweeted. 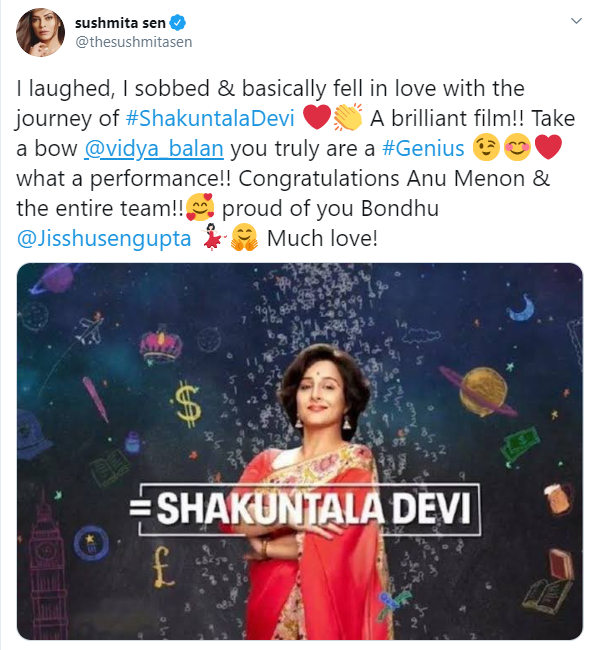 'Shakuntala Devi' has actors Sanya Malhotra, Amit Sadh and Jisshu Sengupta in supporting roles. The movie received favourable response from netizens, and critics as well for its storyline. Balan's performance was also widely appreciated by many. (ANI)