‘Lack Of Clarity On FDI A Concern’ 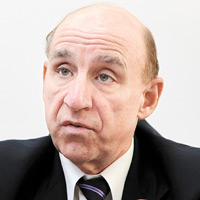 08 November, 2014
Print this article Font size -16+
Despite expectations of continued strength in Asia-Pacific and steady growth in the Americas, investments in real estate will be lower in 2012, dragged down by weakness in Europe, says Cushman & Wakefield’s Glenn Rufrano. The president and CEO of the international property consulting company discusses with BW’s Abhinav Sharma the prospects of real estate markets in 2012, the factors that make Asia-Pacific attractive and how a slow recovery offers opportunities for both investors and developers. Excerpts:What are the trends in the global real estate market this year?
The performance of the global economy in 2012 is expected to be a tale of two halves. The first half will be spent coping with the fallout from the sovereign debt crisis and the global economy will grow at a subdued pace during that period, but the second half could be much stronger for the global economy and, therefore, for real estate markets.
What has been the response of investors to the global real estate market?
Asia is the largest investment region with a 50 per cent share of global trading of $800 billion last year, dominated by land sales (74 per cent). Europe stood at around $200 billion in 2011, and it will be the same number in 2012. Americas was $235 billion in 2011; it will be $300 billion this year. Asia-Pacific was $375 billion in 2011; it will not be more than $400 billion in 2012.
What is your expectation of demand in the leasing market?
We don’t expect rentals to rise. So, we think the rental market will remain flat or subdued. Also, one part of the demand is linked to the US recovery. If there is a big dent in its recovery and global corporations stop adding jobs, especially the technology companies, then we might have issues.
How do you see the global demand-supply equation playing up?
On the demand side, there is plenty of capital available for property in most jurisdictions. Supply will steadily increase. Subject to the pricing, buyers could face one of the biggest opportunities in years.
What are your expectations from the Indian real estate market in 2012?
Strong local conditions, unprecedented numbers of opportunities and favourable investor sentiment will see more international capital deployed in India — especially in residential and office products in Bangalore and around the National Capital Region. The tier-1 cities are expected to carry on their churn and companies will continue to consolidate their operations in cheaper and better locations.
Residential markets in India are driven by strong demand and the preference to invest in the sector for capital appreciation. Except for Mumbai, the markets in almost all other cities have been doing reasonably well. With interest rates expected to be stable and prices not set to decrease, the transaction volume should increase. The retail sector has been doing well and is expected to carry on the momentum in both quality malls and on the high streets across all tiers.
China will continue to remain a big driver where markets such as Shanghai and Beijing really qualify as core assets. Strong turnover will continue to drive excellent fundamentals for investment in mid- to high-end retail
malls in either tier-1 high street locations or strong tier-2 cities such as Chengdu. We are seeing more trends in Indonesia, where the demand has suddenly started to pick up after a period of seven to eight years.
What is fundamentally different between India and other markets?
I think China and India are both big opportunities; but China’s regulatory environment is more open. They have been open for long. Globally, investors are keenly observing India as they recognise the latent potential of the market, but are awaiting a similar regulatory environment to be provided here. China already has the infrastructure in place, but India underscores on that scale. This means people will have to cherry-pick deals here.
China has more scale — its quality and quantum of stock is more than India’s. In China, you could invest 100 per cent in income-generating assets; you can’t do that in India. Here, you will have to take development risks, which some investors see as a good investment opportunity.
However, there have been some concerns that certain residential markets in China are overheated. In most cities in India, the prices (residential) have reached their all-time highs, backed by fundamentals such as increasing cost of inputs and inherent demand.
How attractive is the Indian real estate market for investors?
In India, you talk more about the ‘current environment in India’. For investors, the challenge is the same as what they faced two years ago. In retail, for example, there is a lack of clarity about FDI, and I think it’s a concern for investors.  For offices, it is no different now than what it was.
Unlike most other countries, the BFSI (banking, financial services and insurance) sector in India has shown continuous growth. Globally, a number of international banks and financial institutions have been downsizing; in India they have been mainly involved in restructuring their business lines and in some cases expanding new businesses.