Washington [US], January 5 (ANI): American actor Valerie Bertinelli on Monday (local time), got emotional as she remembered the loss of ex-husband Eddie Van Halen, who died at the age of 65 in October following a year-long battle with cancer.
As reported by People Magazine, while sharing recipes on Monday's episode of the 'Today' show, the 60-year-old actor got emotional when co-anchor Hoda Kotb asked how she's been holding up since the iconic Van Halen guitarist's death. 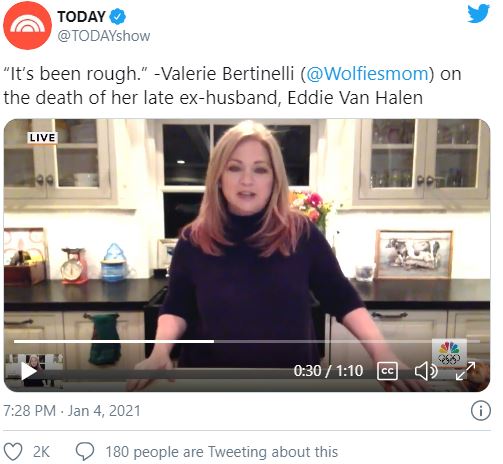 Bertinelli said while tearing up, "It's been rough. Very bittersweet."
Bertinelli then gave an update about her and Eddie's 29-year-old son, Wolfgang, with whom she spent the holidays with.
"We're doing okay. I'll see him later today. We've been spending a lot of time together," she said.
As a sweet photo of the family appeared onscreen, Bertinelli said, "Aww."
"It's hard ... I've gone to text [Eddie] a few dozen times. It's like, 'Oh, no, I can't text him right now,'" she recalled
Before getting into the recipes, Bertinelli thanked co-anchor Carson Daly for the "lovely" 'Today' interview he did with Wolfgang in November.
She said, "It really touched my heart. You handled him, and you were so good to him. As a mom, thank you so much."
Daly responded by saying, "You're only as good as your subject."
He said, "He's an incredible young man. As I told him in the piece, it's a testament to his parents. Both of you. What an impressive young man."
To that, Bertinelli quipped, "Yeah, I kind of like him."
As per People Magazine, Bertinelli and Eddie tied the knot in 1981 and were married for more than 20 years before separating in 2001 and getting divorced in 2007. They were on good terms at the time of his death, and Eddie had attended Bertinelli's wedding to her current husband Tom Vitale.
Hours after Wolfgang broke the news of Eddie's death on Twitter on October 6, Bertinelli spoke out with a statement of her own.
She tweeted alongside an old family photo, "40 years ago my life changed forever when I met you.You gave me the one true light in my life, our son, Wolfgang."
"Through all your challenging treatments for lung cancer, you kept your gorgeous spirit and that impish grin," she continued.
"I'm so grateful Wolfie and I were able to hold you in your last moments. I will see you in our next life my love."
Previously, a source close to Eddie previously told People Magazine that he had a rapid decline in health over the days leading to his death and that cancer had "spread to all his organs."
Bertinelli, Wolfgang, and Eddie's current wife Janie Liszewski were all at the hospital with him at the time of his death. (ANI)