‘It Makes Sense To Be A Bank’ 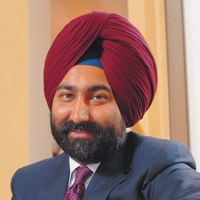 For Malvinder Mohan Singh, non-executive chairman of Fortis Healthcare and Religare Enterprises, the Ranbaxy chapter is one that is "finished and done". He now sees himself as the architect of a new empire, and has tall ambitions in healthcare and financial services. BW's Rajeev Dubey and Noemie Bisserbe ask him how he plans to achieve his new goals. Excerpts:

It has been a year since you sold Ranbaxy. How do you feel?

Today, big pharma companies such as GlaxoSmithKline and Sanofi-Aventis are following the same strategy and picking up stake in generic drug makers globally, which is what I said would happen. I saw it coming. I think it was important for the industry to restructure itself, align itself differently. I believed in it, and I went and did it. I think it was best for Ranbaxy.

Often, promoters don't part with their organisation because of the status that goes with it. Did that bother you?

I look at life very differently. I am in the business of doing business. When I take business decisions, I take them objectively based on economic rationale. As a businessman and an entrepreneur, I am extremely passionate about what I do and what I have done. Having said that, it doesn't stop me from taking the difficult decisions I need to take in business.

Will you look at sectors other than healthcare and financial services?

The main growth engines will be Religare and Fortis. There is tremendous growth sitting on these businesses and they will consume a lot of our efforts and management time. My focus is very clear that no matter what business we get into, we must be the market leader. We need to drive the agenda for that industry.

Religare today is everything but a bank. Do you have plans in the banking sector?

I think it would complete the picture. Ultimately, it would make sense to look at it. It will depend on regulations.

How much of the proceeds from the sale of Ranbaxy have been deployed so far?

I don't recollect the exact number. But that's not so important. When an opportunity is ripe, money will not be a problem. Whatever is required for businesses, will be made available.

What is the new group's management structure?

Sunny (Sunil Godhwani) runs Religare and Shivinder runs Fortis. They have CEOs working under them to run the details of the business. And I am sitting on top of these two guys as the chairman.

Do you see yourself going back to the job of a CEO?

Given our global aspirations, we will do some very large acquisitions. If there is a need for me to jump in and manage a company, I will do it, but only temporarily.