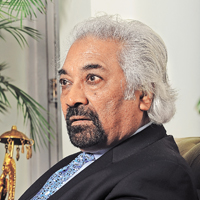 India had 10 million broadband subscribers in october 2010, as against China's 113 million. Ten million is only 50 per cent of the target set by the Department of Telecommunications' Broadband Policy, announced in 2004.

Even these subscribers don't get the committed bandwidth from the operators. India's broadband penetration, too, is abysmally low at less than 1 per cent. It is a yawning gap compared with other Asian countries such as South Korea, which has 100 per cent penetration.

Sam Pitroda, advisor to the Prime Minister on public information infrastructure and innovations, has a tough task ahead to roll out Mission Broadband. In his second stint to bring a revolution in telecom, Pitroda tells BW's M. Rajendran why he is in a hurry to finish the job. Excerpts from the interview.

What is the biggest challenge in Mission Broadband?

Mission Broadband is about to begin. One challenge is connecting people on mobile telephones, through WIMAX, 3G and other technologies. But the real big challenge is to provide the backhaul, which is fibre.

We are focused on two major national programmes by the government, besides what the private players will do. One is related to the National Knowledge Commission, headed by R. Chidambaram, Principal Scientific Advisor to the Prime Minister along with S.V. Raghavan and the National Informatics Centre (NIC) headed by B.K. Girola. They are working to connect 1,500 nodes, with ultimate aim to provide 40 gigabit (GB) bandwidth. To begin with, it would be 2 GB, 10 GB and then 40 GB, to connect all our universities and all our research and development institutions, colleges, and that network will grow.

Wouldn't such a network need huge investment and time to complete?

Such a network would need an investment of $2 billion. It would be set up over a period of two years. National Knowledge Network's (NKN) funding of Rs 7,000 crore has been approved by the Cabinet and since we currently use the existing infrastructure, there is no need for additional funding.

How will the existing networks be used?

This would give the government the ability to connect securely 250,000 panchayats to fibre. It can be done; we already have 1 million km of fibre underground, which is underutilised. We want to use that fibre and add another 200,000-300,000 km of fibre. That's the last mile fibre, so it doesn't have to be underground, and we can pull it over the powerline. That would give the network a capacity to connect to the 250,000 panchayats, to fibre, that would need huge bandwidth.

The investment required for that would be Rs 15,000 crore and that money is already available in the Universal Service Obligation fund. It is the best way to use that money.

How secure is the network? What about the hardware and software?

This network will also have high levels of security. It will be sanitised properly, so when one enters this pipe, for R&D purposes or any other activity, they will have a better control on it. We will give priority to using our own products (manufactured in India). We are looking at designing routers for such networks in India, so we can have better control.

So it would be a government-owned infrastructure?

We also need to create platforms for the Unique Identity project, because it will need a lot of bandwidth. Bandwidth is something that if you have enough, public will know how to use it. Our effort is to democratise information. We need hundreds of megabits at panchayats, not 256 kilobits or 512 kilobits.

It should be minimum 10 mbps, and soon 100 mbps. It is achievable in India.

What would one do with such speeds apart from using it for entertainment?

You give it (broadband) to the young and they will figure out what to do with it. Broadband is not for the old. Give the college or university kid 100 megabyte; they will know the applications for that. The customer base is 550 million young people below the age of 25 years. We need to build infrastructure for them and not for today's government infrastructure.

There is so much at stake. How is this different from your previous stint?

I feel that the enthusiasm earlier was different. Remember, I was also young then. But it is important now to get it done. We have to make it happen for future generations. We are interested in planting seeds.

I am in a hurry to get it done, because I am 68 years and I may have another five years left to work. So I want to get Mission Broadband done in the next three years.

Is the Indian consumer not yet ready to pay for the broadband service?

We do not have applications. Except for downloading music and watching movies and cricket, there is nothing else. There are no applications on education, health or for financial transactions. So we need to apply ourselves to develop applications, to create that demand.

Shouldn't the private players be encouraged to develop applications?

Pension, driving licence, MNREGA, PDS, school admission, birth and death certificate, land records are government services and government needs to develop software applications for such services. The other set of applications will come from the government and private players like, for example, of vocational education.

Instruction manuals for products that we buy are printed in many languages, running into many pages. There is a need for an application to run on broadband, where one can not only view text but see the assembly, functioning or repairing of the product.

In India, no one is bothered about developing applications for broadband. If I need to sell my paintings, it should be on the Web. What we now have is not on a broadband supported application.

Telecom Regulatory Authority of India (Trai) came out with the Broadband Policy in 2004. It set certain targets, but could not ensure that they are met. What went wrong?

According to me, with due respects to Trai, they should focus on regulatory issues and not on policy issues.

Will 3G satiate the demands of wireless broadband services of mobile users?

It's unlikely that 3G alone will fulfil their demands without a fibre backhaul. In a panchayat, the fibre backbone will have connectivity to wireless networks, so 3G is only for the last mile. Because there is no national 3G network.

You mentioned the importance of applications. Are you suggesting 3G operators will not make money in the absence of new applications and content for 3G services?

Precisely, since today all operators are focused on increasing their subscriber base. That's how their market cap is decided. For them, applications and content are not important today. But soon they will realise that whatever average revenue per user

(arpu) they were expecting from data will not come unless they invest and innovate on application and content. There is a great example that operators must look for: in Japan when Vodafone sold their company to Softbank for $20 billion, Vodafone's arpu was going down. Softbank joined hands with Apple and offered iPhone with great applications and content to its customers and the arpu quadrupled in no time.

One can do 200,000 applications on iPhone. Nobody seems to be worried about applications in India. Further, operators will have to collaborate, not for infrastructure sharing alone but also to have single platform for services. Like in the US, where AT&T, Verizone and T- Mobile came together to set up one platform for payment. Indian consumers will soon demand the same, and operators will have to offer them. Right now everything is going well for them, so they are not bothered.

What would it take for mobile money to be successful in India?

Mobile payment has not been understood as a platform. Even in the US, everyone looked at the payment in verticals — mobile banking, mobile money transfer, person-to-person transfer. But I looked at mobile money transfer differently in 1994. There are credit cards, coupons, ticketing and many other services and all of them are different. So when I swipe my card it goes to a card company and redeems my coupons from another company. In a mobile phone, it is necessary to get a consolidated acquisition network, because all of the transactions are money.

On mobile phone, I need to have the ability to aggregate. Credit card, Starbucks, hotels, airline, whosoever wants to give me a card can give it to me on my phone. So, when I go and tap my phone at a point of sales, the phone should be able to pull out my card and coupon, only then mobile money will be a meaningful application. US and Chinese companies are working on these applications.

With growing use of broadband, both wireless and wireline, you say voice will become free. But many operators in India do not agree with you.

That's the operator's privilege. But in many parts of the world, data is taking over the voice traffic. When this happens, voice is free. Most of the revenues are driven by data. In India too, voice will become free sooner than people think.