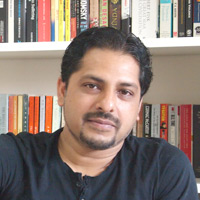 08 November, 2014
Print this article Font size -16+
To write a book on the revival of a company that once became a bad example is a risky business. When and how did the idea of writing this book strike?
I didn’t see writing a book like The Resurgence Of Satyam on the turnaround of Satyam (now Mahindra Satyam) as a risky business. Satyam became a bad brand after the scandal but the story didn’t end there. The company’s turnaround was solid and proven and it was in the public domain for everyone to see, only no one talked about it as part of a larger narrative. That became the spur behind the writing of this book.

I was as shocked by the Raju scandal as any other Indian. I got hooked to the story from the moment Satyam’s chairman B. Ramalinga Raju wrote his letter of confession of cooking his company’s books. When he said that he was riding a tiger that he could not get off from, I thought he had been reading Aravind Adiga’s The White Tiger. That was in 2009.

When the scandal broke, the general feeling was that the company would not survive. The government stepped in, appointed a new board and in a unique example of public-private partnership, they succeeded in salvaging the company. They found a new owner for Satyam in Tech Mahindra — a much smaller company that was part of a bigger business conglomerate. I was curious to see how Tech Mahindra handled the new acquisition and I was not very sure if everything was going to work out so nicely.

When I started working on the book, the ‘India Shining’ narrative — that had been manufactured to attract foreign investors to India — was losing its steam. I thought the Satyam story, of its fall and rise, should make an inspiring story for us Indians. The resurgence of Satyam was exemplary because no other company in the world had survived this kind of a fraud. From The White Tiger, it became the story of The Life of Pi. And I thought someone should tell this story. That’s when I pitched the idea to my agent and within a week we had a publisher backing the project.

What according to you were some of the most striking features of the Satyam turnaround?
One can see the enormity of the turnaround through the lens of challenges that the company faced in the wake of the scandal. Internally, the biggest challenge was to stabilise the company in terms of finances, customers and employees. While investigations (and re-accounting of the finances of the past years) were going on, employee morale was low and the attrition rate was alarmingly high. Many customers had already pulled out. The new management needed to check all the bleeding. At the same time, delivery standards had to be maintained. To complicate the matters, there were nearly 10,000 employees who were without proper work and had to let go.

Externally, Satyam’s image had taken a beating because of the scandal. Hence the go-to-market branding of the company had to be changed from Satyam to Mahindra Satyam. That was easy. What was not easy was that in a challenging economic environment, the new management had to go out and get new customers to keep the business growing.

You have written that it was the will of the people that made the Satyam rebuild possible. Do you also think leadership played a role in this context?
The will of the people, or what I have called the spirit of Satyam, was very much part of the company’s bouncing back story. The Satyamites, or the associates of the company, kept on delivering their services and carried on with their assignments wherever they were despite the ongoing crisis. But leadership also played an important role in the Satyam turnaround. There were legions of employees who were committed to the company but without apt leadership, they might have buckled under. Even though they were performing their duties, they were scared of losing their jobs. What if the company simply imploded? What will they do? There was a recession going on in the market. Where will they go? So, the stakes were very high for them and they were fighting many social and psychological battles. In such delicate circumstances, if they were not handled and guided properly by the leaders of various business units and the top leadership of the company, they might have not survived the ordeal.

Why do you think should a reader pick up this book?
Readers should pick up The Resurgence of Satyam because it is an inspiring book and it has many learnings for them. I want to quote Som Mittal, President, Nasscom, who had this to say about the book: ‘Satyam episode is a great real-time case study with learnings of what not to do and also what can be done to protect the interests of customers, employees, and other stake holders. The Resurgence of Satyam highlights that swift and positive actions can prevent disasters’.
Readers should also grab this book because, unlike many business books, it is not written in a dull and boring style. It is written like a film and the narrative unfolds cinematically. That’s why even lay readers who don’t normally read business books can read it and enjoy it just for the story’s entertainment and dramatic value.

What does the book mean to you?
It means a lot to me. This is my first big book, published by a mainstream publisher, dealing with the subject of India’s biggest corporate fraud. And the good news is that that the book so far has been well-received.

How difficult was it to put the book together?
The challenge was to look at the entirety of the Satyam story — first the scandal and then the bouncing back part of the story. Also, the Satyam story had many facets: criminal, investigative, financial, political, managerial and above all, human. At the same time, there was a timeframe within which I had to deliver the manuscript to my publisher. The story could have become quite baggy if I had tried to encompass everything in great detail. So, I focused on the main elements of the story and shoehorned my research and writing accordingly. Much of the story is fresh in people’s mind and there are lot of details available on the web and other places. I wanted to bring out the human side of the story that had not been presented in detail previously.

Can you share with us one of the most memorable moments you had while writing this book?
Surely, you must have travelled a lot and met a lot of people to put this together...
I had met and interviewed a lot of Satyam officials in Singapore and Hyderabad. But it was in Bangalore where I met a young man who had an amazing and inspiring story about his time at Satyam. And the serendipity of the whole thing was that he was my friend’s brother and I was staying with them in Bangalore. It was unbelievable.

When and where do you write?
Usually I write early in the morning at home or after office hours. I also write over the weekends when I am working on a book or a project. When not at home, I write in cafes or libraries. Singapore has great libraries and excellent cafes.
break-page-break
Can you suggest another title to this book?
There were many titles that we considered for the book. One of them was 'Rebooting Satyam'. My favourite was 'The Spirit of Satyam'. But someone from Mahindra Satyam wanted to write a book with that title, so we let it be and settled for 'The Resurgence Of Satyam'. Not bad, eh?

What’s your energy drink?
Tea in any form — with milk, without milk, green or whatever. I also like Starbucks’ cappuccino when I am writing in one of their outlets.

Now, tell us about Kitaab.org.
Kitaab.org is a link-based books blog where I curate news and views on Asian writing in English. When I launched it, there were big plans for the blog. I haven’t been able to give it enough time but we (I and my wife) still have big plans for it. Sounds like a pipe dream, doesn’t it? (laughs)

What’s the hardest thing being a writer?
Keeping the faith is the hardest thing. Most publishers want formulaic, routine stuff. They want whatever sells in the market. That’s fine because it is a business. But what about a writer who doesn’t want to go with the flow? Where do you fit in? Also, there are far too many publishers and writers in the market today. It is like an explosion. Every journalist today is writing a book or a novel. How do you deal with that? You work hard on a book for years and it goes out there and gets lost in the crowd. The competition is dazzling. There are so many brilliant writers doing the same thing as you do—writing books. Then you wonder. Is there any point in your doing it? And if you have a day job too, it makes things worse in practical terms. In the end, the payoff is largely spiritual, or maybe egotistical, depending on your temperament. Hell, am I shooting my mouth off too much? (covers his mouth with his hand)

What makes a book a really good read or a bestseller?
What makes a book a good read is its readability and the simplicity of the language employed, and it shows if the writer has worked hard on the rewriting part of the book. If a writer is honest and if he or she is not trying to show off, the resulting product should be readable. Engage, don’t impress. I avoid writers who seem to be trying to impress the readers. They bore the hell out of me. You want to show linguistic fireworks, write poetry. I believe in not prettifying one’s language — that, by the way, comes from Naipaul.

What are you reading now?
I am about to finish Jeet Thayil’s Narcopolis and am going to start, The Devotion of Suspect  by Keigo Higashino.

So, what’s next?
As of now, I have a list of seven books that I want to write and some of them are partly written and some of them are in my head. There are a few books on the list that need a lot of time, a lot of money and require me to travel. But where is the advance going to come from I have no idea. So, until that happens, to make matters simple for myself, I am focusing on two books at the moment, and I am hoping that they both get published next year. Then there is a screenplay that I am trying to get produced and a documentary film that I am trying to get edited. Let’s see how it goes (crosses his fingers). Wish me luck!