‘India Is A Supportive Market’ 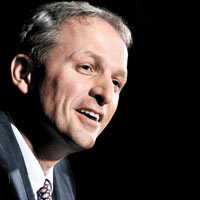 08 November, 2014
Print this article Font size -16+
Alstom Grid, the transmission arm of French engineering major Alstom, has been in India since 1911. With 15 per cent of its sales, the highest  among any of its markets worldwide, coming from India, it remains a crucial market for Alstom Grid. Gregoire Poux-Guillaume, the head of Alstom Grid and executive vice-president of Alstom, during a recent visit, announced the expansion of company’s footprint in India. BW | Businessworld caught up with him for an interview during which he spoke about the technical superiority of the country’s manpower and transmission technology, among other things. Edited excerpts:

What makes India so important for Alstom Grid?
Two factors. It is not just the population or size — there are other countries too that are large, but they are not as significant — but the fact that we have been here for a century; we are fully local. We have localised all our products in factories in India, and that has been the case for decades. So, we are really a domestic incumbent. We are part of the fabric of the Indian electrical industry.

Some of our best technical talent is in India; also, the best talent available internationally is Indian. If you take the example of our competence centre for HVDC (high voltage direct current) in Stafford, UK, the sheer number of Indian engineers across all levels in the organisation is staggering.

The second thing is that India has been a very supportive market for us — we found that as long as we are committed to localising, we and our technical solutions are welcome here. That makes it a very good market to pioneer innovation.

At present, stakeholders in India are vary of the challenges in the transmission and distribution sector. What is Alstom’s take?
On the transmission side, India is very advanced and its performance is very good. In fact, India has become the largest synchronised AC (alternating current) grid in the world as of January 2014.

For instance, in Denmark, we have implemented a system that manages all wind assets, including the wind turbines. The system not only allows us to monitor and manage, but anticipate too. It is like a smart grid.

Among all the challenges the  sector is facing right now, what do you think is the biggest?
Well, I would start with the financial restructuring of state electricity boards. If India can accomplish that, it will unlock the market as a whole.

And, I think our (Alstom’s) next challenge is how to use the India base to export more.

Do you think that will be easy?
India remains a supportive business environment for us. The combination of talent, a strong manufacturing base and the cost advantage, which has been helped by the recent devaluation of the rupee against the dollar, will help Alstom export more from India and give a boost to domestic manufacturers too.

By when do you see this happening?
It is already happening… The future is now. We are looking at how we can qualify some of our factories in markets where they are not qualified so that we can start selling more. We are already selling transformers made in Hosur to Brazil, South Africa and other places. But it is in a limited range today; we really do want to expand.

As a result of these investments, we have made a significant contribution to what is now the largest synchronised grid in India — the AC grid. There are 50 extra-high voltage substations, of which 29 have Alstom technology.

Then, there is the HVDC segment, wherein we are investing in our Vadodara factory and expanding the 800 kv HVDC transformer manufacturing capability.

We feel proud about having been able to make a significant impact on India’s national grid. We now look forward to the next wave of technology. The project cycle has to improve; a lot of projects are held up for different reasons. I only mentioned state electricity boards, but fuel too has been an issue and so have the land and environmental permits. These things have to be tackled parallelly

What is the company’s focus this year?
We have made two significant investments recently. One of them is the extension and upgradation of our power transformer facility in Vadodara. The factory there is only four years old, but we are upgrading it as we are adding capabilities to our DC convertor transformers (800 kv). We are doing so in the context of the project that we are executing for Power Grid and also because we believe the Indian market is going to continue to grow in the DC sector.

The second significant investment is in Pallavaram, near Chennai, where we have our automation factory and development centre. We have also invested in a manufacturing, testing and research facility for digital substations. Since we believe that the way forward for India is to bring intelligence down to the distribution-network level, digital substations are the perfect tool. So, instead of importing, we are capitalising on Indian talent.

Clearly, HVDC, observation and automation are priorities for us in India. However, we are present through the whole range of offerings in the sector.