‘In Luxury, One Has To Be Patient’ 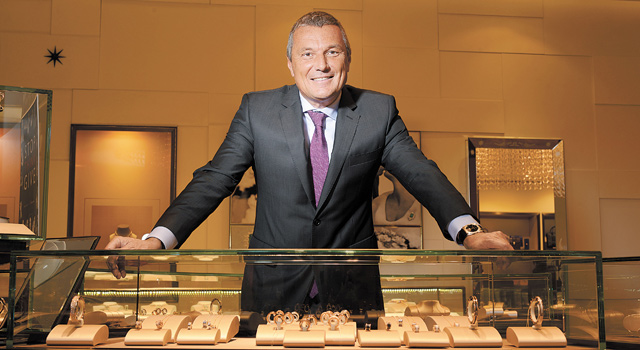 14 January, 2015
Print this article Font size -16+
Jean-Christophe Babin, 56, was the chief executive officer of TAG Heuer between 2000 and 2013, guiding the watch manufacturer to success in terms of both brand sales and profitability. In 2013, he took over as CEO of Bulgari, the Italian jewellery, watch and accessories brand which came into the LVMH fold in 2011.

This year, Bulgari is celebrating its 130th year of operations. Over the years, it has come to be known for its jewellery designs and penchant for coloured gemstones, popular among Hollywood stars such as Elizabeth Taylor and Audrey Hepburn. In 1993, Bulgari diversified into the perfumes business and, a few years later, launched its range of accessories. Bulgari has also entered the hospitality sector with hotels in Milan, Bali and London. It opened its first store in India last week. Babin spoke at length to BW| Businessworld. Excerpts:

Where does India figure in the Bulgari universe?
India is one of the largest jewellery markets in the world, in terms of gold consumption. However, for Bulgari and its competitors, it is not yet a big market because most of the space is taken up by local players. But with the evolution of society and people becoming more nomadic, the historical bond between the jeweller and the family is dissolving, and is getting substituted by the global bond, which only a few global brands can ensure.

Potentially India should become a very important market in the years to come but it is difficult to put a time of return. How long it will take will not only depend upon how good or bad a job I do (laughs), but also on the infrastructure provided in India. Today, Emporio is the only luxury mall in India, in terms of the environment and the service provided. For global brands like Bulgari, the market will grow as and when retail spaces grow. In India, it is very difficult to sell jewellery on the high street. You need locations like malls.

So, as and when infrastructure improves, you will look at expanding in India?
As a part of the LVMH group, we have done a collective assessment of all the new projects that are coming up in the market. We know that a good mall will perform if it has the right brands. If we feel that a mall in Mumbai or Bangalore has what it takes in terms of amenities and services provided, then we will probably move not only as a single brand, but collectively with a large number of LVMH brands as we have done at Emporio.

Brands like Cartier have been in India for long. Do you think you will be able to gain mindshare?
The Indians we are targeting are from the upper middle class and affluent sections of society. They have a deep knowledge of the West. Be it because of the Internet, or because they have studied abroad or travel frequently. So, even though we are opening our first boutique in India, people are aware of Bulgari as a brand.

Our perfume collection has helped to develop a brand awareness in India. Perfumes allow the customer to interact frequently with the brand. We are one of the leading perfume brands in India, which is an advantage compared to our competitors because their brand recognition is not as strong as Bulgari’s.

Of course, now we have a boutique and will intensify marketing efforts — from PR events to trunk shows to advertising. It will be much more than what we did before because then we only had watches, which were available at multi-brand outlets.

Will the boutique in India sell everything from jewellery and watches to accessories and fragrances?
The focus of the boutique will be jewellery, as it is our core business. It was started by the company 130 years ago, and it’s probably what will keep the company famous, 130 years from now. Watches, especially ladies watches, are a kind of natural extension of jewellery. We start with designing jewellery and then turn it into a watch. It is true for most of our collections. So jewellery and ladies watches are the two main categories.

Then, of course, we have some men’s watches that are very successful.
Perfumes are quite a different market. First, because of the price and, second, because of the volume it occupies. It occupies a lot of volume on very expensive real estate. So we will have some limited perfumes in our store, such as Le Gemme that we launched worldwide in Jaipur this February. Le Gemme will be very selectively distributed with only 5 or 6 points of sale, including our boutique. With a price starting at €300, it’s one of our most expensive perfumes.

Bulgari has entered the hospitality sector with the launch of Bulgari Hotels. Will we see a Bulgari hotel in India anytime soon?
Right now, we have three Bulgari hotels. We started with Milan 10 years ago, then added Bali and London. We have announced three more — Shanghai, Dubai and Beijing. These three will be opening around 2016-17. We are looking at another 10-15 projects. India could be within those. The Bulgari hotel for us is the ultimate in luxurious hospitality, and for that we have to keep it limited to ensure that we offer something unique and extraordinary that no other hotel can offer. We want the hotels to be located in trend-setting cities of the world. So if we have a hotel in India, it will probably be in Delhi or Mumbai.

We have received proposals from people owning land, and we are assessing it project by project. It will be great to have a hotel in India because the hotel is kind of a super house of the brand. If the boutique is the house of the brand, the hotel is the temple. So we have to find the right location, the right partner, in the right city. We have a kind of a wishlist. If our had been matched three years ago, we would have come three years ago. In luxury, the key factor of success is to be patient. On the one hand, we have to be bullish because we want to grow, and, on the other, we have to be patient to get the right location.

Earlier, we had a partner who was importing Bulgari jewellery for us in Delhi and Mumbai till 2010. From 2010 until now, we were present only with watches in multi-brand outlets.

Now, we are coming back with jewellery and a larger assortment of watches. We will have a much larger collection of watches at the boutique than we do in multi-brand outlets.

India is a young country. How important is youth for you? Will you be targeting them specifically?
The point is not young or old. The point is to get more customers. Some could be in their 30s, others could be 10 years older. But the thing that makes a luxury brand successful is its capability to bring new people into its fold, especially in jewellery and watches, which are long-cycle businesses. They are different from fashion. In fashion, you have 2-3 collections in a year. The average price is also not that much. So it is a different business model. Jewellery and watches people buy occasionally because the prices are high. So, for us the key challenge is not so much age-driven but to increase the frequency of people coming through the door and interacting with Bulgari. They can have their first brush with Bulgari through a bag or jewellery or through a watch. And once we know each other, they can come back and buy another category.