‘I’ve Never Been Linked To Trends’ 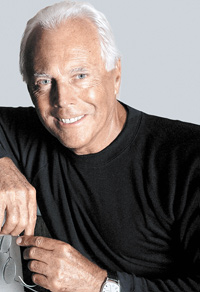 02 December, 2014
Print this article Font size -16+
Giorgio Armani, president and CEO of the Armani Group and sole shareholder of Giorgio Armani SpA, stands as one of the few independent fashion icons today. At 80, he has a world of experience in fashion, having started as a merchandiser at well known Milan department store, La Rinascente. Thereafter, he worked as a fashion designer for Nino Cerruti, and then as a freelance designer for various companies. He set up his own label in 1975.

In 2008, he was conferred with the Légion d’Honneur. Before that, in 2000, New York’s Guggenheim Museum celebrated Armani’s social and cultural influence with an exhibition that has since been seen at the Guggenheim Bilbao, London’s Royal Academy of Arts, Berlin’s Neue Nationalgalerie, Rome’s Terme di Diocleziano, Tokyo’s Mori Arts Museum and Shanghai’s Shanghai Art Museum.

The fashion icon in a free-wheeling conversation with BW|Businessworld. Excerpts:

Do you think the Indian luxury market has potential?
I would say so. India fascinates me. It is an amazing and vibrant country that is still going through a period of great change. In recent years, we have seen a growing interest in fashion, especially from Indian women who are constantly looking for more sophisticated and exclusive clothing and accessories. They have shown themselves to be very receptive to the Armani Group’s sense of style.

Today you have four Emporio Armani stores in India and one Giorgio Armani store. What are your future plans for India?
We have been present in India for six years with the Giorgio Armani, Emporio Armani and Armani Jeans collections. It’s a complex market that is constantly evolving. The intention is to develop the presence of our brand in the country through a thorough understanding of consumer and market dynamics.

We started with the project to create the interiors of the residences and common areas of the World Towers in Mumbai in 2012. We then expanded our presence in the area with Armani Casa, thus offering Indian customers a more complete view of the Armani lifestyle.

How important are emerging markets like India for Brand Armani? How much revenue can these markets contribute to the company in the next few years?
Emerging markets have experienced a growing desire for luxury in recent years. The desire for sophisticated and exclusive goods has increased, and this undoubtedly represents an important opportunity for investment.

You have always been a trendsetter, whether it is designing bomber jackets or dressing up stars for the red carpet. Have there been any defining luxury fashion trends in the last four-five years? What will be the upcoming trends in luxury according to you? Personally, I have never been linked to passing trends. Rather, I have always preferred to create a timeless style that is elegant and sophisticated, and based on the principles of quality, comfort, functionality and excellence in design.

This is the philosophy that I apply to everything I do — from my fashion collections to interior design.

What are the differences in the markets that Armani operates in? Isn’t the demand of the luxury consumer in, say, Europe different from America and the Middle East, for instance? How is the Indian customer different?
The markets are undoubtedly different. The European market, for instance, is more settled, and therefore more rigid, while the American market is free from constraints and, hence, extremely receptive to new things. Emerging markets, including India, are bustling, demanding, dynamic and constantly being redefined, though they are united by a growing desire for luxury goods.

Are your clothes customised according to the country you operate in? Are there any Indian inspirations in your designs or have you tried to customise the collection to meet Indian tastes?
The underlying style and point of view of what I offer is unique and does not change based on the country. The Armani Group offers a rich and varied product offering, and consumers in every country have the possibility of finding out what they like the most. In the Giorgio Armani fall/winter 2014-15 collection, there are Indian inspirations. I have created a series of T-shirts made of wool/mohair yarn, whose colors are inspired by the exoticism of India.