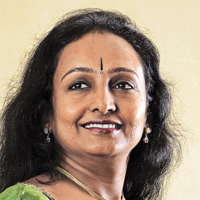 Renuka Ramnath faces a peculiar challenge. She has to better her own record as one of India's most successful private equity (PE) dealmakers. The former managing director and CEO of Mumbai-based ICICI Venture, the country's largest PE investor, is now in the last stages of raising a $500-million fund for her fledgling PE firm Multiples Alter-nate Asset Management.

When Ramnath stepped down from ICICI Venture in April 2009, after 21 years, she left behind a deal-making powerhouse with over $2 billion in funds under management. But Multiples, she says, will define her legacy as she attempts to break new ground in the way she raises funds or approaches deal-making. Tired but visibly happy at the end of a hectic day in her new office in central Mumbai, Ramnath talks to BW's Snigdha Sengupta about freedom, partner-ships and the next big leap in her impressive PE career. Edited excerpts:

You could have become independent much earlier. Was the exit well-timed?

The timing, actually, was fantastic. My son graduated and my daughter is now in college (both in the US). This (Multiples) is the baby that I have to look after now. I had been thinking about moving for a year-and-a-half before I quit.

There comes a point when you say that, okay, I have accepted some things up to a certain point and it does not make sense any more. The other aspect is that the other party may not accept that you have come of age and you need to chalk out your own future.

For me, it was a combination of all these factors. I had been discussing with ICICI for some time that to scale further, we would need to completely change the ICICI Venture model. In the existing model, it would have been difficult, at least for me, to scale and meet the aspirations of the management.

What kind of changes did you have in mind?

The PE business requires flexibility. In large organisations, this becomes difficult because you are operating on someone else's brand and economics.

As a standalone fund, how has the fund-raising experience been?

LPs (limited partners or institutions that invest in PE funds) attach a lot of weight to my track record. But they are mindful that it is only the first stage for Multiples. So the evaluation has been rigorous.

Fund-raising was in two phases. We started with domestic investors — institutions and individuals. We have raised money from 40-odd entrepreneurs; between Rs 5 crore and Rs 50 crore each. On the global side, all of it has come from institutions, mostly pension trusts. Generally, overseas institutions prefer standalone firms because of flexibility. Not all the institutions are people that I had prior relationships with. For instance, Canada Pension Plan Investment Board picked us to enter India (it has committed $100 million).

When we complete fund-raising, likely in December, domestic investors will account for maybe one-thirds of the total corpus.

Any specific reason why you are raising funds from entrepreneurs?

The intent is completely strategic. It was not to solve my fund-raising problem; I can raise all of it overseas. But to operate effectively in India, it is important to have a strong franchise here.

These entrepreneurs are looking at it as portfolio diversification. Now, it is up to us to create a systematic approach to harness their domain capabilities when we evaluate deals. Deal-flow is also an expectation from them.

Why have you capped the fund size at $500 million?

Initially, we had thought $450 million. But I think we will finally close with $500 million in December. The size is manageable and it also restricts the size of companies that one can invest in.

What will be your sweet spot in deals — in terms of ticket size and type?

We want to put money into the services sector. We do not want to do me-too deals, PIPEs (private investment in public equity), and so on. It has to be an opportunity where we can make a difference.

Sector-wise, the focus would range from healthcare to infrastructure services to EPC (engineering, procurement and construction) companies, architecture firms, and so on.

You have done controlling stake deals at ICICI Venture. Will this continue?

We are already evaluating quite a few such transactions. Such deals may be created by other PE funds exiting, where some of the existing shareholders want to get out. Or the management may want to continue, and we will work with them. In others, we may change the business and bring in new management. There are enough such deals in the market. We don't have to create them. But the focus would remain on services companies.

Why this dogged focus on services? Why not manufacturing, for instance?

I am not a big enthusiast of low-cost manufacturing. It is difficult to make money there. In services, everything depends on your domain expertise, your people capability. You are solving an important need in a unique way. So the upside is very high.

I am not interested in recreating ICICI Venture. Multiples is a new company. I have no legacy portfolio. I want to create a culture that is appropriate for this firm.