Mumbai (Maharashtra) [India], February 24 (ANI): The makers of the much-anticipated film 'Gangubai Kathiawadi' featuring Alia Bhatt, on Wednesday, announced the theatrical release date of the film. The movie, helmed by Sanjay Leela Bhansali, will hit the big screens on July 30, 2021.
The 'Student Of The Year' actor hopped on to Instagram to share the release date of her film, along with an intriguing poster.
Dressed in a pastel green saree, with her hair tied in a long braid, the actor has aced the look of a traditional Gujju lady. The actor's kohl-rimmed eyes and a red dot on her forehead completed the look perfectly. In the poster, Bhatt seems to strike a powerful pose resembling a boss lady, as she rests her feet on a chair next to her. 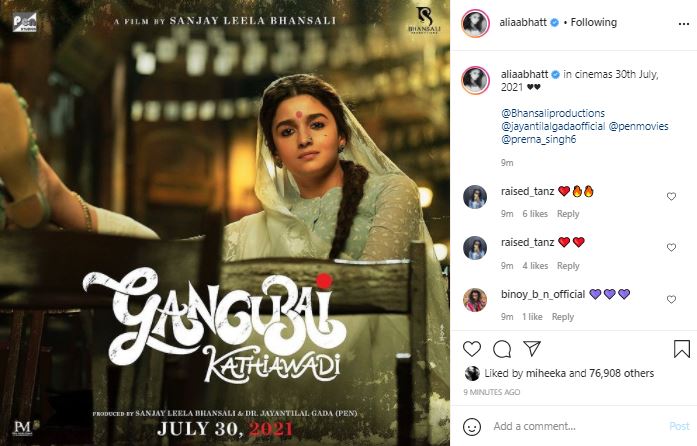 Going by the poster, it seems that the actor has gone into the skin of the character. Bhatt looks promising and it's safe to say that her fans are in for a visual treat.
Bhatt captioned the post, "In cinemas 30th July, 2021" along with a pair of black heart emoticons.
Based on the book 'Mafia Queens of Mumbai' written by S. Hussain Zaidi, the film showcases the rise of a girl named Gangubai Kothewali, a brothel owner and matriarch from Kathiawad who had no choice but to embrace the ways of destiny and swing it in her favour.
Helmed by Sanjay Leela Bhansali, 'Gangubai Kathiawadi' marks the first collaboration between him and Alia. This project will also see Bhansali Productions collaborating with Jayantilal Gada's Pen India Limited. (ANI)