"Focus On Your Core Strength" 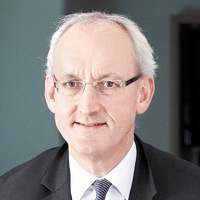 How long will the current bout of uncertainty last?
(Laughs) I can understand the view in India, because if you look at the euro zone crisis, the concern is what is the end game? People can speculate about that and there is impatience and frustration and loss of confidence. But it's more about the lack of clear and decisive political leadership. Businesses that we talk to are generally confident about their own business, but lack confidence in the environment they operate in. And in this environment of crisis as ‘business as usual', one little indicator is what happened when Standard & Poor's downgraded France and Austria. The markets barely moved. They are probably impatient about the lack of clear political leadership.

I cannot speculate on how long this uncertainty will last, but I can say 2012 will continue to be a very interesting year.

What makes you say that?
It's hard to imagine that the indecision can continue throughout 2012. Sooner or later, there will be definitive action and consequences. It has been a rocky ride so far. And we should not expect things to be comfortable again in Europe. We have to anticipate a low-growth environment for long. With many governments embracing austerity packages, many citizens in Europe will see no real rise in living standards for another five years. Actually, as the crisis is sustained, businesses adapt, governments adapt and hence people adapt.

What are the common concerns among your Indian clients?
Certainly, the continuing malaise in Europe is one, for big exporters. Also, there is a concern about the pace of change within the Indian business environment. I come from the UK. It has definitely provided benefits to the UK in terms of FDI, such that the biggest employer in the country's manufacturing sector is an Indian company, Tata. There is confidence and optimism in a lot of emerging global players based out of India.

Are your clients worried about the rupee's volatility?
Not especially. Currency volatility is just one aspect of the shock. Some economies have found ways to insulate themselves from currency shocks. It's easier for developed economies to manage currency. For an economy like India, which is better placed, the more diverse you get, the more you can achieve sustained stability through the economic cycle.