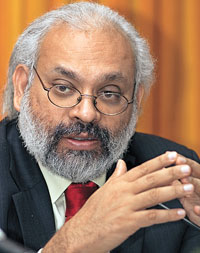 08 November, 2014
Print this article Font size -16+
Reserve Bank Deputy Governor Subir Gokarn has said there is a need to "dematerialise" gold like any other financial product to reduce its physical imports, the rise of which has been blamed for the high current account deficit that is feared to touch new record high this year.
"It (high gold imports) is creating some macroeconomic stresses and so the challenge is to find ways to replicate the financial characteristics of gold without necessarily causing physically importing," Gokarn told the last day of the two-day annual Bancon in Pune on 25 November.
The current account deficit or CAD has been rising on the back of record trade deficits, which in October jumped to a 12-year high of USD 21 billion on the back of rising oil and gold imports.
Read: RBI Bars Financing Of Gold Purchases
Reeling out the high gold import data, Gokarn said a working group headed by KUB Rao of RBI will shortly be coming out with its report on the ways to deal with the problem arising from high gold imports on macroeconomic front in the form of balance of payments.
He said while global gold output has stayed stable at around 4,000 tonne per year, the domestic consumption of the yellow metal has doubled to 1,000 tonne annually since 1999, despite a massive rally in the prices.
"More expensive gold is being imported in larger quantities which is compounding the troubles," he said.
As gold imports touched a record high last year, pushing up the current account deficit to a historic high of 4.2 per cent in the year, the Reserve Bank has unveiled a slew of curbs on gold purchase and financing.
Last fiscal, there was a 39 per cent rise in gold imports and in gross terms, it constituted for 80 per cent of the current account deficit, which reached an all-time high of 4.2 per cent, Gokarn said, adding the net gold imports constitute for 1.8-2.4 per cent of GDP.
This spike in gold demand was in spite of the record price rally that the metal witnessed last fiscal.
It can be noted that in April the RBI brought down the loan to value or LTV that gold loan companies like Muthoot Finance or Manappuram Finance could offer just 60 per cent of the market value, from a high of 85-90 per cent.
In the 30 October credit policy, the RBI also banned banks from funding gold buying by gold loan companies and NBFCs.
(PTI)
Tags assigned to this article:
rbi subir gokarn news 4 imports gold fiscal deficit credit policy reserve bank of india current account deficit gold demand financial product dematerialise buy back