‘Cloud Computing Is The Fifth Wave’ 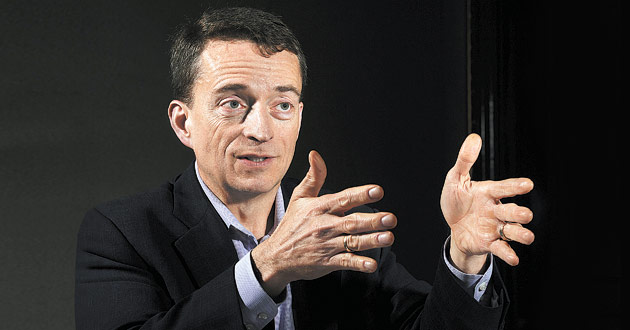 08 November, 2014
Print this article Font size -16+
VMware is an American technology company that provides cloud and virtualisation software and services. Virtualisation in computing refers to the process of creating a virtual (rather than a real) version of hardware, operating systems, storage devices, and computer network resources. It has helped technology companies reduce expenses by boosting efficiency and agility. Though VMware is majority owned by data storage giant EMC, it operates independently and works with even competitors of its parent. It accounts for a quarter of EMC’s revenues, and more than 70 per cent of EMC’s market capitalisation of nearly $60 billion. VMware, which had revenues of $5.21 billion in 2013, is the fifth-largest software company in the world.

A leader in virtualisation software, VMware has set its sights on the cloud and software-defined data centre markets. In India, the company is competing with offerings from vendors such as Amazon, Microsoft and Google. In its effort to redefine the data centre market, VMware has not been averse to taking on even a partner like Cisco. Pat Gelsinger, the chief executive officer of VMware, is an industry veteran having  earlier worked with Intel and EMC. On a recent visit to India, he spoke to BW|Businessworld on how VMware sees the global technology industry. Excerpts:

Has the server virtualisation story played out in most markets? In desktop virtualisation, VMware has had limited success with Citrix, but it still has a greater share. Is the focus now on network infrastructure and data storage virtualisation themes?
I don’t think that the server virtualisation story is complete; there are plenty of opportunities in the compute part, both in Big Data and in business-critical areas. Even in terms of geographies, there is variance. In Asia, for instance, less than 20 per cent of the customers have virtualised their environments. In the telecom space, there are 6-7 million servers in infrastructure, which are yet to be virtualised. Also, we don’t see the virtualisation market in pieces. We have a fairly holistic view of the software-defined data centre (SDDC) around compute, network, storage and security. We are virtualising the data centre, on-premise and in the cloud.

The virtualisation and cloud computing technologies are leading to unprecedented changes in the data centre. We are moving away from client-server computing to the mobile-cloud era, and VMware will be the bridge between the two, helping enterprises make that transition. We are building a strategy around SDDC, as opposed to the current hardware-defined data centre (largely shaped by Cisco). This is the most significant architectural shift in the past 30 years of information technology. We are focused on the cloud, enabling SDDC and end-user computing.

How is VMware’s vision of the cloud different from Amazon, Microsoft and Google?
The cloud is the fifth wave of computing starting from mainframe to mini-computers to PC and the Internet era. A tectonic shift is taking place, and it will cause the same kind of disruption as the earlier shifts. Those who do not adapt to this will fade away or die. We have immense respect for the capabilities of our competitors. But a company like Amazon is positioned more for the public cloud. Yes, they innovated early and were aggressive. Yet, in spite of their recent attempts, I believe they don’t have the technology to address the private and hybrid cloud market.
break-page-break
Let me tell you that 92 per cent of cloud is on-premise (private cloud), while the public cloud market is growing faster. Gartner forecasts that by 2020 on-premise will be 77 per cent. You can move workloads to Amazon, but can you move it back to your data centre? While the public cloud market may attract attention, all the action is in the private and hybrid cloud. Amazon hasn’t been able to crack the code for enterprise.

Google is focused on the end-consumer market. I haven’t seen the same intent and aggression on the enterprise cloud market from them. However, Microsoft is the one we watch out for. They are strongly embedded in the enterprise (space) and have the resources to invest. But given our own strengths with our 500,000 customer base, obviously, we believe that we can not only effectively compete, but also win.

There are three things that differentiate our strategy in the cloud space. First, we are uniquely focused on the enterprise customer — their need for security, management, and compatibility on-and off-premise. Second, our abilities in the hybrid cloud offerings — we will be able to create compatible infrastructure because our asset is the 40 million virtual machines, 500,000 customers, and giving them a compatible expansion to the public cloud. My millions of virtual machines dwarf the size of Amazon because we are building up that footprint and this is a huge advantage for us in creating the compatible extension to the hybrid cloud. The third piece of our strategy is with partners, and we have thousands of service-provider partners.

Do you see OpenStack as competition or as an opportunity to extend your position?
OpenStack is an open framework for interfaces that allows people to construct a cloud. We always have and will continue to support those interfaces. We work with customers who opt for OpenStack and want to run it on the VMware technology. We don’t see OpenStack catching on significantly in the enterprise market. It is more of a platform for service providers to build the public clouds. Also, OpenStack is highly fragmented. We believe that VMware component technologies are the best to build and deploy enterprise-level cloud environments.

In your quest to define and shape SDDC, you are antagonising a powerful partner like Cisco. When John Chambers (the CEO of Cisco) last spoke to us, he expressed his ‘disappointment’ at the Nicira acquisition and your push into the data centre market. Your comments?
Cisco continues to be a valued partner of VMware, and we work closely with them, as we do with our other partners. Moves in the marketplace are dictated by our customers’ evolving needs and requirements. VMware will continue to anticipate and address the needs of our customers, both current and potential. Our goal is to be on the right side of technology, do the right thing for our customer and enable the ecosystem.

How important is India for VMware?
Both from a talent supply viewpoint and increasingly as a market, India is key to VMware’s success. We will invest $500 million in India over the next three years. About 2,300 of our global 16,000 employees are in Bangalore and Pune. The headcount growth in India is the fastest. Outside the US, we have the largest employee base and operations with all our activities having a footprint here, including research and development. We are building a campus of our own with this investment. We have more than 3,500 customers in the country, and are working with 100-plus partners. The investment will help strengthen our leadership position in the virtualisation and cloud computing
market here.