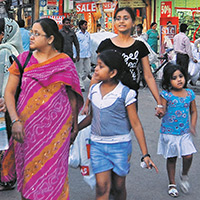 08 November, 2014
Print this article Font size -16+
The consumer is evolving and evolving fast. In a game where marketers have to often play catch up, how can they bridge the gap? The answer lies somewhere in understanding the behaviour of children and their parents, both in the physical and online world.

The average Indian consumer will have six times more disposable income in their hands by 2020. However, the ability to spend need not be equal to willingness to spend, said Nimisha Jain, principal at consulting major The Boston Consulting Group (BCG). Jain was addressing a select gathering of consumer goods industry executives at the CII National Retail and FMCG Summit 2013.

The one factor that will drive purchase behaviour of the younger set of consumers is the influence of children. Studies show that children currently account for 30 per cent of the population in India, but account for as much as 45 per cent of the consumption in India. And if you thought pester power, the power of children to influence buying decisions, was only restricted to certain categories, BCG executives point out that a massive 80 per cent of consumption decisions are influenced by children (barring investment decisions, of course). What makes the segment even more attractive for marketers is that at least 40 per cent of households with children trade up their consumption patterns for children.

For India, the influence of children is only set to get bigger. By 2020, children will make 36 per cent of the population in India compared to 25 per cent in the US and 22 per cent in China. That’s where the ability of a marketer to tune in to the needs of the segment gets critical.

Globally brands like Lego use the digital world as an active listening post to know the preference of children and make changes in their product design or develop new products accordingly. In India various estimates suggest that the number of Internet users is going to move up from 125 million as we speak to about 330 million by 2020. Even today, one of the largest online shopping categories is baby products, points out Prakash Iyer, managing director for Kimberly Clark Lever in India. In a way it’s a natural fit because nursing mothers do not want to travel for buying a supply of baby diapers.

Even in categories like food, the online world is playing a large role in growth of certain categories says Geetu Verma, executive director-foods, Hindustan Unilever. For instance, Pasta and Chinese cuisine are among the most searched recipe items on the Internet from India. So it’s not a coincidence that a category like Olive oil, used in Italian dishes, is growing in excess of 23 per cent every year. It’s very likely that most of these internet searches are made by anxious mothers eager to tickle the taste buds of their children. One could well say, child is the father of the marketer.