Mumbai (Maharashtra) [India], December 31 (ANI): Summarising the journey from December to January, veteran actor Anupam Kher on Thursday shared a poem describing the relationship between the two months.
The 'Saraansh' star posted a video on Instagram and shared a poem dedicated to positivity and hope.

In the video showcasing a montage of the winter season in the New York City, he recited, "Isn't it extraordinary? the relationship between December and January... Just like old memories and new promises." 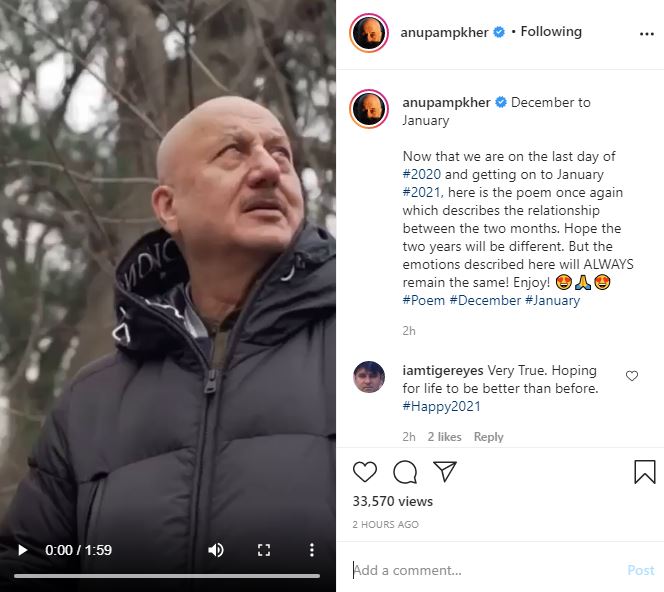 "Both are very sensitive, both have depth, both indicate time, and both have their flaws. Both have the same face and colour, the same number of days, and are just as cold!"

"But each has a unique style, and behave uniquely. One symbolizes the end. The other ushers a new beginning, just like how days come after night, and how night follows day. One is filled with memories, the other gives hope. One has the experience, the other has faith."

Talking about connection between the two, Kher asserted, "Both are just as connected, as two ends of a thread. But, even though poles apart, they stand by each other!"

"What December leaves, January accepts as its own, And the promises made by January... December makes them true.

"While they are merely- two months in a year, they bear the responsibility of all that is scattered, Both together, bind all other months. But when separated, is a worldwide festival."

Taking to the captions, the 'Dilwale Dulhania Le Jayenge' star captioned the clip as, "December to January...Now that we are on the last day of #2020 and getting on to January #2021, here is the poem once again which describes the relationship between the two months."

"Hope the two years will be different. But the emotions described here will ALWAYS remain the same! Enjoy! #Poem #December #January," he added. (ANI)