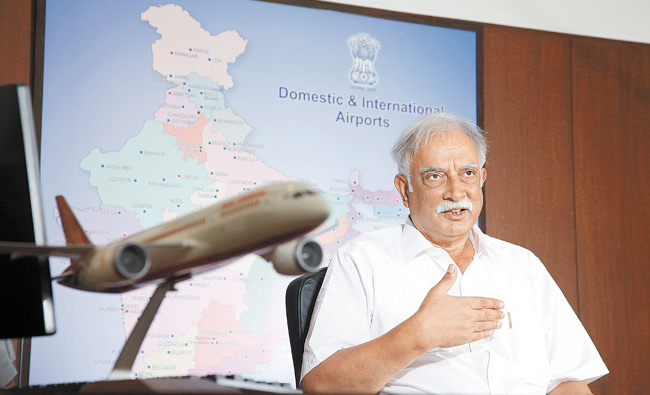 16 June, 2015
Print this article Font size -16+
Maintaining a cool demeanour amidst the constantly changing fortunes of the civil aviation sector comes naturally to Ashok Gajapathi Raju, the Union civil aviation minister and first-time Telugu Desam Party MP from Vizianagaram. Raju is confident of  making the sector more vibrant. Speaking to BW|Businessworld, he explained how the country’s new civil aviation policy would usher in a new wave of development for the sector. Edited excerpts of the interview:

You had a quiet 12 months in office as the civil aviation minister...
The year went off fairly well because we did not compromise on two basic tenets governing aviation — safety and security. They are of utmost importance to me. Aviation as a service is very important for the country. We want the sector to become more vibrant, as it has a multiplier effect on the economy. In the past year, both passenger and cargo traffic registered growth. I see tremendous possibilities for the cargo sector in the coming years.

Private carriers had a good year in terms of performance. How do you rate the performance of your ministry in the past one year?
We are in the process of finalising a new civil aviation policy based on the comments and suggestions on the draft policy, which I had issued in November 2014. The new policy will be out soon. Then, the Directorate General of Civil Aviation certified GAGAN or GPS-aided geo-augmented navigation, which is an Indian initiative. It is fully-operational now. GAGAN will improve the accuracy of a global navigation satellite system receiver by providing refresh signals, communication, navigation, surveillance and air traffic management system (ATM) over Indian airspace. This is an achievement for us. Then, the ATM has been upgraded at Mumbai and a new automation system has been installed at Kolkata.

You spoke of a new civil aviation policy being in the works. What will be its highlights?
As mentioned earlier, finalisation of the new policy is underway after taking into account the various suggestions received on the draft policy. The main features of the new policy will be development of airports, rationalisation of the cost of aviation turbine fuel (ATF), development of the cargo sector, institutional reforms, improvement in regional connectivity, modernisation of the air navigation system and other areas. Rationalisation of taxes on ATF may not be easy though.

Do you think the 5/20 rule for flying abroad should be scrapped? What about the opposition from established players? What steps have been taken to improve connectivity across India?
After several rounds of discussions with stakeholders, the existing route dispersal guidelines have been revised to provide better connectivity to the northeast region. As far as the 5/20 rule (5 years of operations and a fleet size of 20 airplanes are mandatory for a licence to fly abroad) is concerned, consultations are underway. But such a rule is not found anywhere in the world. Personally, I feel that it should go. It has pulled down the players. Our airlines are just not able to cope. Bilateral air service agreements too have not helped. The existing players don’t want new players to come. But the government has to take a holistic view. Do we want India to become vibrant or not? That is the question we need to always ask.

What are the major projects in the sector that have been executed in the past 12 months?
The construction of Kadapa and Bikaner airports is complete. The new terminals at Mohali, Tirupati and Khajuraho are nearing completion, and will be operational soon. The total investments at Mohali, Tirupati and Khajuraho terminals have been to the tune of Rs 452 crore, Rs 174 crore and Rs 75 crore, respectively. The terminal at Vadodara is under construction with an investment of Rs 116 crore, and will be operational by the year-end. Apart from this, the Airport Authority of India (AAI) had signed a memorandum of understanding with the Orissa government for the development of Jhasuguda airport for A-320 operations. The AAI has also prepared a road map for the commissioning of common user domestic air cargo terminals (CUDCT) at 24 airports it manages. This will be done in a phased manner. The AAI has already commissioned CUDCT at Coimbatore, Jaipur and Lucknow airports. Therefore, there is a lot of potential for the cargo business in India.

Much has been written about Air India and its financial performance. How do you view its future as a national carrier?
Air India is a good airline. Whenever it has been called upon to deliver, it has delivered. Whether it was the good work in Yemen, or Nepal. Yes, its finances are in a bad shape due to a variety of reasons. If all those issues are sorted out, then it will be good for the carrier. At the ministry, we are monitoring the airline closely, be its ‘on-time performance’ or the indiscipline in maintaining its service, among others. We want to eliminate all the shortcomings as far as possible. Air India’s reach within India is the largest based on route dispersal guidelines. It has a 23-24 per cent share; others have just half of it.

What is being done for Air India’s turnaround? There are indeed some legacy issues with Air India. We cannot turn the clock back and correct them. The airline is capable of doing well, which has been demonstrated recently. There is a need for continuous motivation. Fault-finding exercises will not take it anywhere. We have to learn from the past mistakes and move forward. That is the way to make the airline and its staff work productively.

What would you be focusing on over the next four years?
I think the most important thing, going forward, is improvement in regional air connectivity. There are 31-32 airports in India where no landings and takeoffs have been recorded in the past one and a half years. We need to incentivise airlines to go there. In most of these airports, the runway length is not adequate. Therefore, these airports need to be connected by smaller aircraft. But most airlines do not have smaller aircraft. So what do we do? We need smaller players, regional players. I can see some of the smaller players coming. Even some state governments are getting into joint ventures or tying up with regional airlines. That is my focus area, too.