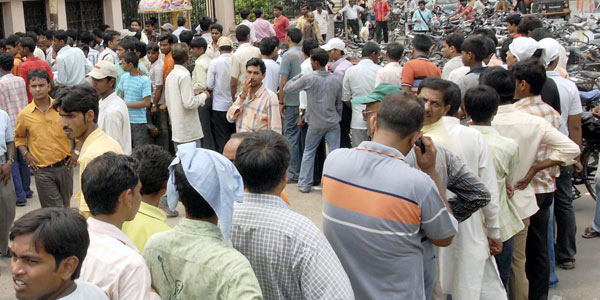 action/2015, one of the world’s largest civil society campaigns, is leading several public actions in India and worldwide, calling on government leaders to use financing for development summit to tackle tax injustice, fund fairly with a focus on the poor and marginalised, and honour their aid commitments. A signature campaign is being launched across India, with citizens holding the government accountable to the slogan "Our Money, Our Future, Your Duty" and demanding a higher GDP share investment towards the citizens' Human Rights and Development.

action/2015 is calling on the public to join them in their calls to ensure world leaders commit to a better world. Throughout 2015, the campaign will provide ways for everyone everywhere to get involved in influencing the outcomes of these global debates that could achieve: An end to poverty in all its forms; The meeting of fundamental rights, tackling inequality and discrimination; An accelerated transition to 100% renewable energy and a world where everyone can participate and hold their leaders accountable.

Globally, action/2015 has called for 11 July to be a Global Day of Action. National Coalition Partners NACDOR/SETF while joining 1000s from over 70 countries, are organising at the historical Jantar Mantar, New Delhi a colourful Cultural Event “SADDA HAQ ETHE RAKH”, bringing together youth and children from excluded and marginalized communities. Through dance, music and art the young artist are going to express their concern on the importance of the SDGs and the necessity to increase the budgetary allocation to warranty a more inclusive world with equal opportunities, equal education, zero malnutrition and better social service for all.

Among other organisations, children from Save the Children’s projects are acting on the importance of SDGs from a child’s perspective, the YouthDignity Forum from NACDOR is going to perform a dance on women empowerment and child trafficking, we will also have a street Play on Ambedkar and various other inspiring songs would accompany the gathering in an evening ofjoy, inspiration and hope. NACDOR/SETF will also be organising various public actions in over 11 states and 30 districts of India, to showcase our demand fora better future.

Malala Yousafzai, student, Nobel Peace Prize Laureate and co-founder of the Malala Fund said: “Leaders of the 21st century must deliver on their promises to invest in the future and start investing in books, education and hope, rather than in weapons, war and conflicts.” said Malala. “Only education will unlock the potential of millions of my sisters and brothers. They are brilliant young minds who will become, if given the chance of 12 years of quality primary and secondary education, the next great scientists, engineers or teachers or anything they want. Getting millions of girls into school seems impossible. But like my story, it is not. What we have seen is that when we choose to act, girls in the darkest corners of the world can be reached with the light of education.”

Upon culmination of the signature campaign, the signed banners with an estimated 5Lakh signatures from 15 states, along with specific demands will be handed over to the state finance ministries, district collectors etc. A comprehensive national total of signatures and summary of demands will be handed over to the Finance Ministry in Delhi. Digitally, an estimate of 10Lakh citizens will be mobilized on facebook and twitter through the #heatisON campaign.

The 3rd International Conference for Financing for Development is taking place in Addis Ababa, Ethiopia, from 13th July to 16th July, wherein global governments, leaders and agencies are mobilizing and committing resources towards the implementation of Sustainable Development Goals for the next 15 years. India's demand is to ensure Tax Justice, to invest higher GDP percentage in basic services like education, health, sanitation etc. and to eliminate the flow of Black Money earned from corruption outside and within the country.

Amitabh Behar, National Anchor, action/2015 India said: “This is one of the most critical moments before the UN General Assembly ratifies the Sustainable Development Goals (SDGs) for the next 15 years. In what makes SDGs distinct from the preceding Millennium Goals is that this time around, world leaders, donors and UN agencies have decided to commit resources before signing off the SDGs. Since no means of implementation would mean no commitment towards development. If member countries, including India, fail to allocate substantial funds, then achieving the SDGs will remain a distant reality.”

Tags assigned to this article:
sustainable development poverty finance Our Money Our Future Your Duty