New Delhi [India], Aug 8 (ANI): Spinner Yuzvendra Chahal and choreographer Dhanashree Verma sealed the deal with a Roka ceremony on Saturday, where the duo said "yes" to each other along with their families.
The couple donned traditional attires for the ceremony.
"We said "Yes" along with our families #rokaceremony," Chahal tweeted. 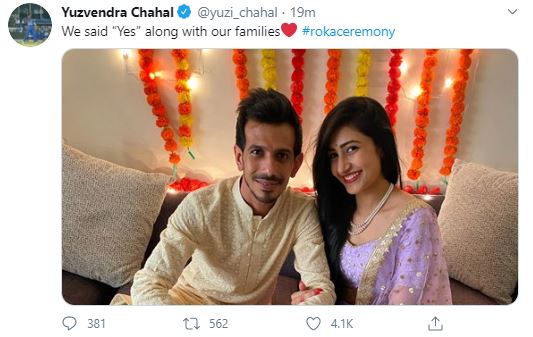 The spinner would next be seen in action for the Royal Challengers Bangalore (RCB) in the Indian Premier League (IPL) slated to be played in the UAE.
The tournament will be played from September 19-November 10 and it will run for a total of 53 days.
For the first time, the IPL final will be played on a weekday (Tuesday).
Chahal was last seen in action in the ODI series against New Zealand in February this year.
The 30-year-old has so far played 52 ODIs and 42 T20Is for India, managing to take 146 wickets across both formats. (ANI)