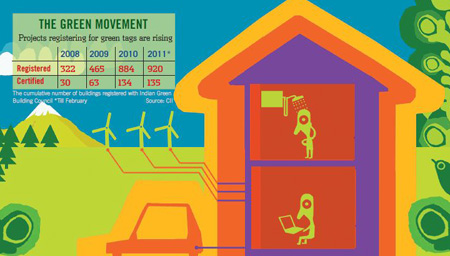 Hariharan, a PhD in econometrics, turned to sustainable housing after he helped rehabilitate victims of the Uttarkashi earthquake in 1991. Learning about quake-resistant architecture led him to explore the need for water- and energy-efficient buildings. That is how BCIL came into being in 1996.ZED's idea is a back-to-basics one; to make "prosumers" of consumers. You produce a part of what you consume, be it energy through solar panels or biogas; water from rain-water harvesting, or greens on sky-gardens with recycled waste as manure. What is more, buildings of ZED (Zero Energy Collective) don't use bricks, forest timber, ceramic tiles and ozone-depleting air-conditioners.

Green Rangers
One of the biggest contributors for green-house gas (GHG) emission across the globe has been the building and construction sector. According to UNEP's Sustainable Building and Construction Initiative 2007, the sector accounts for 25-40 per cent of all global energy consumed, and 30-40 per cent of GHG emissions. Turning green can save as much as 40-50 per cent energy expenses and 20-30 per cent on water on an operating basis, says M. Anand, senior counsellor at the Indian Green Building Council (IGBC) of the Confederation of Indian Industry (CII).

The number of people voluntarily opting to go green is going up. Conscious of the fact, a small but dedicated group of architects and experts now help the likes of Hariharan to push a sustainable agenda. Jaigopal G. Rao and Latha Raman, residents of Kochi, have an office built entirely of engineered bamboo. Treated and used in combination with reinforced cement concrete (RCC), plaster and steel, the grass is available in abundance and grows faster than timber.

On the eastern coast, C.N. Raghavendran, partner at Chennai's leading architecture firm CRN, claims credit for a dozen of the 135 IGBC-certified green buildings. Raghavendran has been into green buildings for over 15 years and continues to place his faith in high-performance glass, which he used in the construction of Tidel Park, an IT park in Chennai, in 2000.

According to IGBC, 920 projects have registered for green certification as of the beginning of February, almost 400 of them last year alone. Green buildings recognised by IGBC now cover an area of almost 600 million sq. ft. The council, which tied up with the US Green Building Council in 2003 to bring the Leadership in Energy & Environmental Design, or LEED, rating system to India, has done much to encourage the move — whether through untiring workshops for the industry or by publicising its rated buildings, including its own platinum-rated office in Hyderabad.

Vendors And Greenbucks
A green building often earns its credentials thanks to a host of technological and environmentally intelligent materials and equipment. They include products such as motion detectors that switch off lights the moment your shadow cross the doorway, timber from ‘sustainable forests', and even waterless urinals. IGBC estimates the market for green material is already more than $4 billion (about Rs 1,850 crore).

Chennai-based Danfoss Industries, an arm of Danish firm Danfoss, maker of HVAC (heating ventilation and air conditioning) components, builds devices that run energy-efficient central air-conditioners in commercial buildings. Vinod Jethani, national business development manager, says it has seen 30 per cent growth in sales in recent years. Sameer Joshi, general manager for marketing (interiors) at Godrej & Boyce, says, "The growth of green products (workstations) has been exponential. They constitute about 55 per cent of total sales." Green furniture used to cost 30-40 per cent over standard fare, but with greater volumes, the premium has come down to 10-15 per cent. "Today, many developers and architects know that the cost of implementing energy-efficient solutions can be recovered through savings within 2-3 years," says Pramoda Karkal, vice-president and managing director, building efficiency, at Johnson Controls India. The firm's recent energy efficiency indicator survey among business leaders found 85 per cent of the respondents felt energy management was important.

However, it was not a buyer's market always. Raghavendran recollects how, a decade ago, he had to import all the glass for Tidel Park from Japan. Today, Saint Gobain manufactures special nano-coated, double-glazed and treated glass for both sunny and cold climates; and even solar panel films in the country.

Says Bangalore-based architect Sharukh Mistry: "New converts to sustainable architecture are even more welcome than original believers." This new awareness, he says, extends to home owners. "The driver today is the user, who demands to know exactly how sustainable the design is, how relevant the construction is to local climate, and how efficient is the energy and water usage. Most have done their homework."

It Pays To Go Green
Large-scale real estate players such as the Rahejas and Mahindra Lifespaces are also walking the talk, for certain projects. The Rahejas have tied up with CII to get green certification for 10 selected projects. Mahindra Lifespaces has registered its Mahindra Chloris residential complex in Faridabad and the Mahindra Splendour project in Mumbai for green certification. On an average, commercial buildings with technology-backed credits cost about 8-15 per cent more. But, says Hariharan, they don't have to. "The lack of time spent in finding the best solution at the design stage translates into higher costs," he says. He admits that initial years were difficult for his business, but he is looking forward to a 30 per cent year-on-year growth. BCIL is also leveraging its expertise in developing home-grown solutions and vendors. Over the next three years, it will construct 800,000 sq. ft on its own and offer consultancy to another 3 million-odd sq. ft of green projects.

Kolkata-based Forum Projects' IT park Technopolis, a totally green complex, became the first building in India to be registered for carbon trading with the UN's clean development mechanism (CDM). CDM helps industries earn incentives in the form of certified emission reductions. Rahul Saraf, managing director of Forum Projects, says he is saving the credits and will trade them only to promote green architecture. Forum has also raised energy saving from 37 per cent in Technopolis to upwards of 50 per cent in the newer projects in Kolkata.

While private players are doing their bit to go green, government initiatives, though well-intentioned, have been patchy. For instance, the Indian Bureau of Energy Efficiency (BEE) has introduced the energy conservation building code (ECBC), but has not made it mandatory. "It is an excellent code, but should be made mandatory as soon as possible," says R. Subramanian, director of sales and marketing at Saint-Gobain.

Among states, Tamil Nadu has set a few examples. Not only did it make rain-water harvesting mandatory in 2003, but its new state assembly complex has become the first green building of its kind in the world. But such steps are only symbolic, says Brahmanand Mohanty, an energy expert at the Asian Institute of Technology. "Government policy should not just design a framework, but it should also be accompanied with incentives," he says. "The bigger challenge in the growth of green architecture is not technology but changing consumer behaviour," warns Mohanty, who is also a consultant to several governments and the World Bank.

The only financial incentive now available is a 0.25-per cent concession on interest rates from the State Bank of India on home loans for green buildings. But the only way green can truly make a difference is when the movement is brought into the mainstream, says Mohanty. Explains architect Satprem Maini, director for Auroville Earth Institute: "Managing natural resources is essential. Hence, educating people by providing awareness, skill and livelihood is the key for the success towards sustainability."