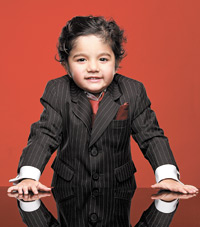 08 November, 2014
Print this article Font size -16+
You may have noticed something odd about business sentiment in India over the past few years. On the one hand, many leaders of big- and medium-sized companies in the country have sounded rather pessimistic about their prospects. They have also put their expansion plans and projects on hold or scaled down ambitions and targets.

On the other, an ever increasing number of young people are giving up secure jobs and stable opportunities to turn entrepreneurs and start up new companies that hope to revolutionise business sectors and markets. Or even create markets where none existed. And many of these people are taking risks despite having little capital or organised support. They are far more upbeat about their prospects than many of the established business leaders.

One can try and explain this by saying that young people are naturally more optimistic. But that would be both simplistic as well as incorrect. In the past, boom times have generally given rise to startups while their numbers have shrunk as economic sentiment dipped.

For example, during the go-go years of the first dotcom boom of 1998-99, access to easy venture funding saw a record number of people  — ranging from college students to housewives, and from middle-aged executives to presidents of companies  — setting up their own dotcom ventures. Many of them had no real business plan, and others simply aped the plans of more famous startups in the US.

And VCs often competed with one another to get a slice of the new companies. Similarly, during the early days of the BPO boom, every other person you met was starting up an IT-enabled services company.

Once the economy corrected after these booms, the number of people setting up companies dropped dramatically. The dotcom bust, in fact, saw people scramble to get back into stable jobs and entrepreneurship fell out of favour for quite a few years.

The interesting thing about the current boom in entrepreneurship is that most of the startups you meet now have actually kicked off their ventures in what is ­considered to be a bleak phase in the Indian economy, when access to venture funding and other forms of capital is tough.

In fact, a big chunk of this group of new entrepreneurs has bootstrapped its startups, and is ­prepared to go without external capital for at least two to three years. Some of these people could have got employment in big companies with fat compensation packages, even in the midst of the downturn, but have chosen to follow a path fraught with risk.

There are a few other things that set apart the entrepreneurship boom of the past three or four years from earlier ones. The biggest change you notice is the lack of herd instinct and the absence of a ‘fashionable’ area which everyone wants to get into. In the past few years, BW| Businessworld has met and written about entrepreneurs who have set up hospitals, those who are trying to provide home repair services  — by getting carpenters, electricians and plumbers together, people building businesses around the Cloud, startups setting up alternative fuel power plants in rural areas, people creating apps for the app economy and those into robotics. When we shortlisted the best entries for our Young Entrepreneurs issue this year, one of them was building a business by aggregating guest houses and budget hotels while another was tapping into the need of companies that employed a fair number of working mothers with very young children by setting up crèches in offices.

The other thing that you notice about the current generation of entrepreneurs is that the movement is spread across the country, with a fair sprinkling of the entrepreneur population coming from what are called tier-2 and tier-3 cities. Sure, Bangalore may still be the startup capital of India, but it is by no means the only city throwing up ideas, or with a monopoly of the best ­startups.

Finally, many of the new entrepreneurs have no illusions about the hurdles ahead of them — and are conservative while spending money. They also have clear ideas about how they will make money, and how many years it will take to break even. Many of them are also clear that they will seek formal funding only after they have scaled up to a certain size.

Despite the large number of entrepreneurs setting up businesses every year, there are still many obstacles in their path compared to their counterparts in the developed world. The government’s policies — or, in some cases, the lack of policies — in a host of sectors that big corporations often grumble about also pose significant hurdles for many startups. Setting up a business in India is tougher and more time consuming than it is in most western countries.

Another hurdle that startups face is the small number of angel investors  — far fewer than is necessary for a country like India (See ‘Waiting for An Angel ‘BW 19 November 2012). To compound matters, many venture funds have turned conservative owing to the economic conditions of the past few years not allowing them to exit their previous investments easily or with the returns they had expected.

Finally, the lack of or poor infrastructure issue that dogs all businesses affects startups as well.
None of these are, however, deterring an increasing number of young people from striking out with brave new ideas. These people are prepared to fail once, even twice, before getting it right. This is a heartening trend because, in the long run, if India is to grow at 9 per cent-plus, it cannot just depend on big business to get there. A lot of the growth will have to come from new businesses started by first-generation entrepreneurs. And that is why the current entrepreneurship boom inspires hope.