You will continue to remain BJP leader in future as well: Giriraj Singh to Sushil Modi

You will continue to remain BJP leader in future as well: Giriraj Singh to Sushil Modi

New Delhi [India], November 15 (ANI): After Katihar MLA was on Sunday elected BJP's leader in the Bihar assembly, Union Minister Giriraj Singh put out a tweet for Sushil Kumar Modi who was the leader of the party's legislature party in the state before the just concluded assembly elections.
"Respected Sushil ji, you are the leader, you had the post of Deputy Chief Minister, you will continue to remain the leader of BJP in the future as well, nobody's status is determined by the post he holds," Singh tweeted in Hindi 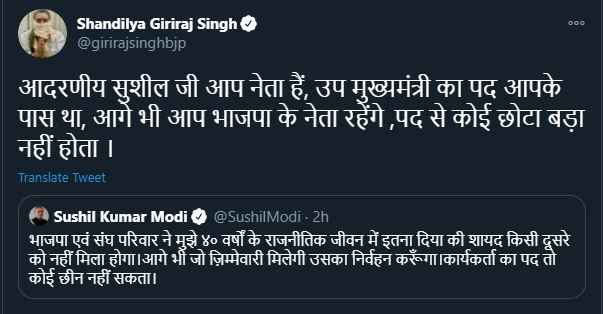 He was responding to a tweet put out by Modi, who served as the deputy chief minister in Nitish Kumar's last cabinet.
"The BJP and the Sangh Parivar gave me so much in the political life of 40 years that someone else might have not received it. I will discharge the responsibility that will be given to me. No one can take away the post of the worker," Sushil Kumar Modi had tweeted.
Katihar MLA Tarkishore Prasad was unanimously elected as the leader of the BJP party in Bihar.
Earlier in the day, a meeting of the NDA was held where Nitish Kumar was named as the leader, paving the way for his return as chief minister for the fourth consecutive term.
NDA secured a majority in the recently-concluded election to 243-member Bihar Assembly by winning 125 seats.
Janata Dal (United) chief Nitish Kumar met Bihar Governor Phagu Chauhan to stake claim to form NDA government. Later, he announced that the swearing-in ceremony of the new cabinet will take place on Monday.
"Oath taking ceremony to be held tomorrow afternoon around 4.30 pm," Kumar said. (ANI)