You have lived and breathed cricket: PM Modi applauds Raina on glorious career

You have lived and breathed cricket: PM Modi applauds Raina on glorious career

New Delhi [India], Aug 21 (ANI): Applauding Suresh Raina on his glorious cricketing career, Prime Minister Narendra Modi said that the southpaw "lived and breathed cricket".
In a tweet on Friday, Raina shared the letter of appreciation from PM Modi and wrote in the caption, "When we play, we give our blood & sweat for the nation. No better appreciation than being loved by the people of this country and even more by the country's PM. Thank you @narendramodi ji for your words of appreciation & best wishes. I accept them with gratitude. Jai Hind!" 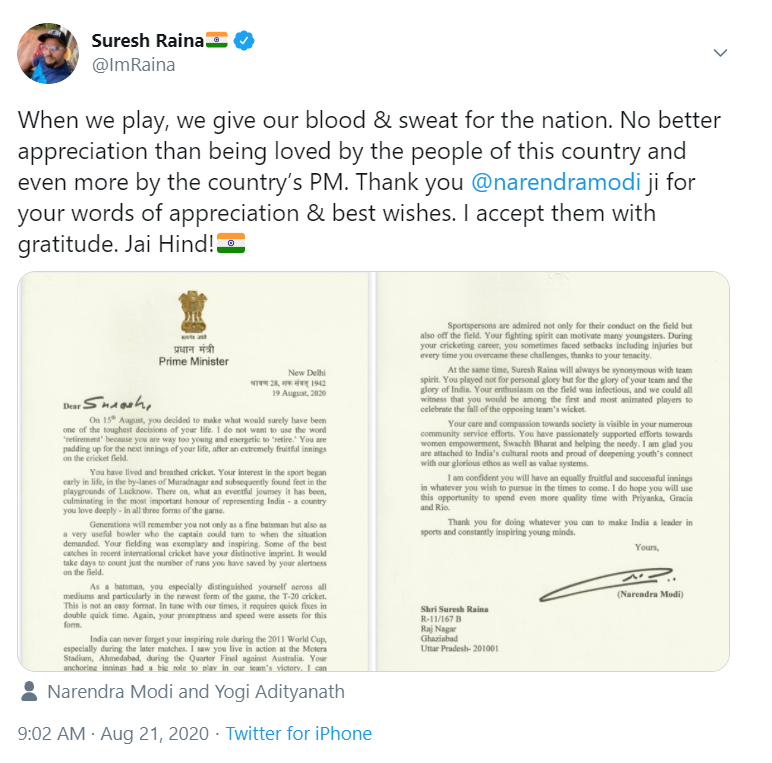 Recalling the initial days of Raina's career, PM Modi wrote in the letter: "You have lived and breathed cricket. Your interest in the sport began early in life, in the by-lanes of Muradnagar and subsequently found feet in the playgrounds of Lucknow. There on, what an eventful journey it has been, culminating in the most important honour of representing India - a country you love deeply - in all three forms of the game."

He further appreciated the spectacular fielding of the all-rounder and his batting, particularly, in the shortest format of the game.
"Generations will remember you not only as a fine batsman but also as a very useful bowler who the captain could turn to when the situation demanded. Your fielding was exemplary and inspiring. Some of the best catches in recent international cricket have your distinctive imprint. It would take days to count just the number of runs you have saved by your alertness on the field," the letter read.
"As a batsman, you especially distinguished yourself across all mediums and particularly in the newest form of the game, the T-20 cricket. This is not an easy format. In tune with our times, it requires quick fixes in double-quick time. Again, your promptness and speed were assets for this form," it added.
Reminiscing the 2011 World Cup and Raina's "inspiring" role during the tournament, the Prime Minister said, "India can never forget your inspiring role during the 2011 World Cup, especially during the later matches. I saw you live in action at the Motera Stadium, Ahmedabad, during the Quarter Final against Australia. Your anchoring innings had a big role to play in our team's victory. I can confidently say that most fans will miss seeing your elegant cover drives, one which I was lucky to witness live that day."
PM Modi further said "Raina will always be synonymous with the team spirit" and wished him for his post-retirement innings.
The 33-year-old announced his retirement from international cricket on August 15 following the footsteps of his leader Mahendra Singh Dhoni.
A world-class fielder and a useful bowler, Raina represented India in 18 Tests, 226 ODIs, and 78 T20Is in an international career spanning 13 years.
A member of the World Cup-winning team in 2011, Raina first made his international debut at the age of 18 and also led India in ODIs and T2OIs when he turned 23.
He is the youngest to lead Indian men's T20I side and was also a member of the side that played in India's first-ever T20I. The southpaw is also the first Indian to score a century in the T20 World Cup.
Under his captaincy, India registered a 3-2 series victory in West Indies and a 2-0 win over Bangladesh in ODIs and a 2-0 T20I series win in Zimbabwe.
Raina, who scored a century on debut in Tests, is also the first Indian to have hundreds in all three formats of the game and his centuries were scored outside India. (ANI)