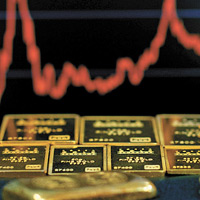 08 November, 2014
Print this article Font size -16+
The festival season has barely begun but the yellow metal is already on a high in India. On 23 August, gold prices hit a record Rs 30,699 per 10 grams on the Multi Commodity Exchange, despite the cushion offered by a relatively stronger rupee, which has gained 0.8 per cent against the dollar in August, the second-best showing among its 11 most-traded peers in Asia. High prices have prevented jewellers from stocking up on gold ahead of the festive season. Globally, gold prices have risen to their highest levels in more than three months. Experts say that rising prices may hurt jewellers’ earnings this season, especially as a weak monsoon is likely to impact the spending power of consumers. Already, India has seen a fall in gold imports. A report by the World Gold Council said that India had witnessed a 20 per cent year-on-year fall in gold imports during April-June, while demand for jewellery fell 10 per cent.
Sleeping Bodies
There are more than 140,000 dormant companies in India, according to the corporate affairs ministry. As on 20 August, Maharashtra accounted for the largest chunk of the lot, with 35,664 defunct firms, followed by Delhi (28,905), Andhra Pradesh (23,284), Tamil Nadu (16,373) and Gujarat (11,269).

Cursing CRR
India’s largest bank has a different take on the cash reserve ratio (CRR) — the minimum cash that each bank must
mandatorily deposit with the RBI. Pratip Chaudhuri, chairman of State Bank of India, asked the RBI to either do away with the CRR or compensate banks for losses. Keeping funds with the RBI without any interest was causing a loss to the tune of Rs 21,000 crore to the banking system, he said, pointing out that the CRR rule did not apply to companies in insurance and similar sectors even though they too mobilised deposits from the public.

Green Signal
Finally, GVK Power and Infrastructure received environmental clearance for its $10.4 billion Alpha coal and rail project in Australia. The nod comes with 19 riders aimed at protecting the environment. The Alpha scheme is one of the major projects in the Galilee Basin in Queensland, and had triggered a row after activists opposed mining in the eco-fragile region.
Dearth Of Deals
Only $110 million. That’s the value of stakes that private equity (PE) players have offloaded in the second quarter of this year through 12 deals. The value of exits has fallen a whopping 89 per cent from a year ago while the number of transactions have been 33 per cent fewer this year, says a research report by audit firm PwC.
Cause For Cheer
Infosys can heave a sigh of relief now. An Alabama court dismissed harassment charges filed against the firm by one of its US staffers, Jack ‘Jay’ Palmer. This brings to an end a long-drawn case against the Indian IT services giant.
Shedding Weight
Air India may sell five long-range Boeing 777-200 aircraft, worth about Rs 7,700 crore, after it failed to lease out
the planes to other airlines. The national carrier had bought the aircraft as part of its $11-billion deal for 111 aircraft in 2006.
Receding Rain
The monsoon showers were 2 per cent below average in the week to 22 August, said the weather department. In the past week, the shortfall was at the same level, with the drought still affecting the oilseeds and cotton growing areas in the west. The monsoon, vital for 55 per cent of India’s farmland, is 14 per cent short of average so far.
Kindling Demand
Amazon unveiled the India Kindle Store, which showcases over a million books, priced in rupees. It roped in Tata-owned Croma Retail to sell its latest Kindle e-reader, priced at Rs 6,999.