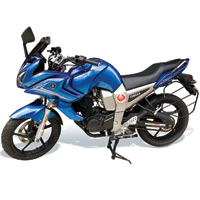 08 November, 2014
Print this article Font size -16+
Japanese two-wheeler giant Yamaha on Tuesday, 9 April 2013 said it is working on to roll out a motorcycle priced at around $500 from India with the setting up of its fifth global research and development centre.

Claiming that the bike will be "the world's cheapest motorcycle", the company said India will become the global hub for development of low-cost bikes, which will be exported to other countries in Africa and Latin America.

The company's new entity Yamaha Motor Research and Development India Pvt Ltd (YMRI), which was established at Surajpur in Uttar Pradesh in February this year, has already started its work to develop the product that will be first launched in India.

In order to enhance its position in the Indian market, the company will launch a new scooter model each year till 2016, apart from setting up its second R&D centre by 2015 at its upcoming Chennai facility.

Without sharing any timeframe of launch, he said the company is developing the bike with an engine capacity of 100 cc or more as "smaller bikes with smaller engine do not have good balance".

"We will first launch the bike in India. There are also other markets like Africa and Latin America where such bike can be sold. We will export the product to such locations in future," Kobayashi said.

As per the plan, the first step will be to develop the world's cheapest bike, followed by an India-specific model. This will be followed by a global model in future, he added.

Yamaha's move is part of strategy to expand presence in the commuter segment, specially in the Indian market.

"We have been focussing on sporty, stylish and performance bikes in India so far. Now we are looking to increase our presence in the commuter segment. Developing the product in India will give us a substantial cost advantage and enable us to price it competitively," India Yamaha Motor (IYM) Chief Executive Officer and MD Hiroyuki Suzuki said.

He said the company is looking to sell 7.1 lakh units of motorcycles and scooters this year, including 2.1 lakh of exports. IYM had sold a total of 4.9 lakh in 2012.