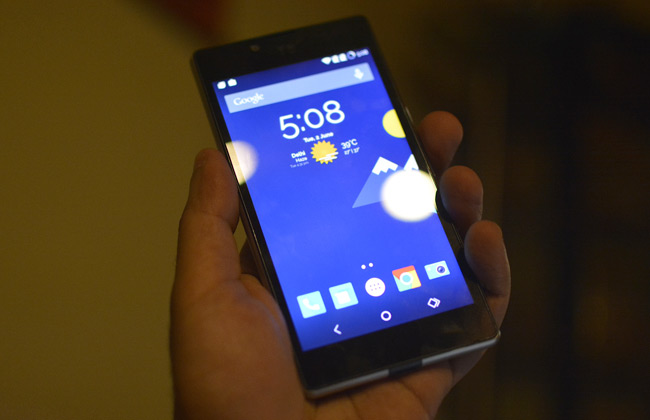 08 June, 2015
Print this article Font size -16+
Micromax announced a subsidy brand in January called YU with the launch Yureka, a sub 9K smartphone running on Cyanogenmod, a tweaked version of Android which offers a lot of customizations. The brand has been trying to compete against the mob of Chinese smartphone makers that have been flooding the Indian market. Their recent attempt is sub 7K smartphone called the Yuphoria.
The construction includes a metal frame in the middle and a soft removable plastic cover at the back. The back also includes a large ring with camera lens in the middle and an LED flash on the edge of the ring. Underneath the back cover there is the removable battery, two SIM card slots and a microSD card slot. The display measures at 5-inches with a respectable 720p resolution protected with Gorilla Glass 3, making it one of the few devices to have such protection. The quality of the display is sharp but not the best on colours and offers a slightly warmer tone. Since there are no capacitive keys, the only hardware buttons are for the volume and lock which are fairly large and easy to access. The overall finish of the device feels good and the built is sturdy for a smartphone costing Rs.6,999.
On the hardware front the handset features a Snapdragon 410 processor with 2GB of RAM and 16GB of internal memory which can be expanded further. There is an 8MP rear camera and a 5MP front camera and a 2230mAH battery to juice the device. The handset also supports 4G network as one of the two SIM card slots supports LTE band.

The handset runs on Cyanogen OS 12, custom version Android Lollipop 5.0 which feels very similar to stock Android along with some customization settings via themes and other features like Truecaller integration and a backup app called Baton. The software experience is promising as everything runs smooth, although it starts going slow once you start filling it up with apps. There are instances when the smartphone tends to heat up, like when gaming for longer periods, which has been issue with almost all the smartphones running on a Snapdragon 410 chip.
The camera performance is not the best when compared to other smartphones. There is a custom camera app which a bunch of filters and settings but when it comes to the quality of pictures, it is not up to expectations. The colour saturation feels low and somehow you don’t end up with very sharp pictures.
Does the Yuphoria justify the price? Yes, it is definitely value for money with minor compromises. There are a bunch of other smartphones with almost similar specifications and performance capabilities but the USP of the Yuphoria lies with Cyanogen OS which has been famous among the Android power users.
Tags assigned to this article:
more 4 gadgets kunal khullar yuphoria yu