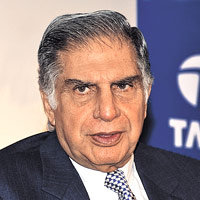 08 November, 2014
Print this article Font size -16+
Tata Group would never favour a hostile takeover, its former chief Ratan Tata has said. "Yes, I've said that and what I mean is that if a company doesn't want us, we're not going to take it by force," Tata told CNN in an interview, which would be aired on Sunday.

"What we do before we acquire a company is spend a lot of time looking at the human chemistry, and the management and the work ethics and the -- and the manner of working of that company," he said.

"If there's a chemistry problem, or a business policy deviation from us, we have walked away from companies which would be good business fits for us, but its method of operation would be too alien, so we have stayed away from it," Tata said.

Responding to a question, Tata said it is not true that the Tatas are a family company and that the proceeds of these industrial operations go to the Tata family. "It does not. The family owns about 2 per cent, collectively, of Tata Sons," he said.

"And the 60, 65 per cent that goes to charity, has always been seen as a noble usage of the wealth we have created from our companies, it goes back into education, medical, elevation of poverty or rural development. So, in a manner of speaking, it has always been our driving force that what we're doing is really for plowing it back to the people of India," Tata said.

Tata agreed that the group has a tough policy against corruption. "We have 450,000 employees and I am quite open in the statement that I can't guarantee the integrity of every one of them," he said.

"What we do, when somebody breaks that code, how we deal with that person, I think, is the true index of what we will do and when we have had a major rogue officer or director, we have actually prosecuted that person and the person has actually gone to jail.

"So, I think we have walked the talk in terms of what we have advocated; we practice what we have preached, as a matter of fact," Tata said.