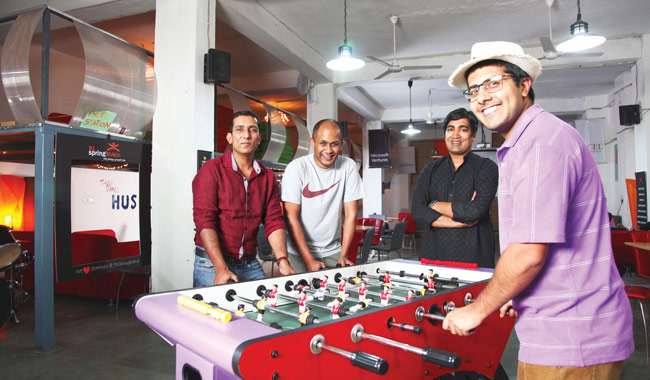 In may 2015, Sushanto Mitra, founder and CEO of Lead Angels Network, an angel investment firm, decided to bet on the business prospects of MyCuteOffice, a Mumbai-based online portal that connects users to shared office spaces in six cities across the country. Mitra’s company invested an undisclosed sum in the marketplace for co-working spaces for one specific reason, its asset-light model, which he says provides opportunities to grow and scale the business much faster.

Though Mitra’s investment was in the digital platform, MyCuteOffice derives its core value from the brick and mortar business of the fast-growing co-working space. The cities — Delhi NCR, Bengaluru, Hyderabad and Mumbai — which the portal covers are all startup hubs, where there is an ever-increasing demand for cost-effective office space for budding entrepreneurs.

MyCuteOffice is adding one new city to its portfolio every two months, a clear indication of the growing presence and demand for shared office spaces all over the country including in tier-two and tier-three pockets such as in Barauni, Bihar and Nagpur.

Roaming Workers
World over, the concept of co-working places, where different companies or individuals share working space, gained steam with the increase in the number of individual workers and freelancers. According to a survey done by online co-working magazine Deskmag in February 2013, there was an increase of 83 per cent in co-working spaces in just one year serving a total of 117 per cent more members.

Unlike globally, there is no concrete data on co-working spaces in India, perhaps because it is still in its nascence. A broad indication though, comes from the number of people who are opting to freelance. The Global Online Work Report 2014, published by California-based online staffing platform Elance-oDesk, says there are 1.9 million Indian freelancers (or potential co-working space hunters) registered on the site and this number has been increasing at 62 per cent for the past three years. The report lists India among the top 10 freelancer-earning countries globally with a growth rate in these earnings of 22 per cent year on year.

Success Formula
One of the main benefits of co-working spaces is that they provide the infrastructure which otherwise would have been prohibitively expensive. Aakriti Bhargava, co-founder of startup marketing firm Boring Brands says: “I used to work out of Gurgaon-based co-working space 91Springboard for a year. What helped is the easy access to facilities such as a meeting room and the fully-equipped, 24/7 corporate canteen which is difficult to afford in a rented office. Also, there is absolutely no hassle of handling the administrative work and one can focus on getting the work done. The place also helps to attract good talent as they expect a certain quality of workplace hygiene in addition to a decent pay and benefits.”

The presence of like-minded people under one roof also helps with opportunities to exchange ideas, barter services or boost each others’ morale, which comes in handy especially in the startup culture that is otherwise replete with ups and downs, say people who have used co-working spaces in their entrepreneurial journey.

While customers find co-working spaces convenient, providers of these services are yet to find a sure-shot formula for success. Says Pranav Bhatia of Stirring Minds, an 8,000 sq. ft co-working space in central Delhi, “We keep the margins low to ensure full occupancy of the space and sometimes give the space at half price or even less to social enterprises.” Bhatia, in fact, started a co-working space in August 2013 because he wanted to create a ready pool of talent to outsource projects for his California-based tech startup Lemon Interactive Inc. But as he grew more involved with the co-working space startup, VCs and individual investors began contacting him for steady advice. Now he too has become an investor with equity in four startups.

Most of these spaces charge per workstation and one can rent a place on a day-to-day, monthly or an yearly basis. Pranay Gupta, co-founder of 91Springboard says the payment model of co-working spaces can be compared with that of Amazon’s Web Services — pay only for what you use.

The Side View
It isn’t just service providers who are experimenting with different models but developers who own the real estate as well. One basic model involves earning more cumulative rental income from different clients than what one would have got from just one customer.  “As a developer if one can get better rent from the property by renting it as a co-working space then it’s a no brainer. Another way to rent out the property is through revenue sharing so the co-working space provider pays the property owner a certain amount as the base rent component and the remainder in revenue share. Co-working space providers prefer this method as it saves them from paying large rents upfront, especially when they are starting out the business,” says Ankush Johar, partner, Lloyd Venture, a multinational investment company that has recently invested in a 10,000 sq. ft co-working space in Gurgaon.

The revenue share percentage depends on the negotiation between the two parties. Usually, there is a base rent to be paid and the revenue sharing can be in 50:50, 70:30 or 80:20 ratios. The terms of the negotiation are based on the risk appetite of the real estate owner and also on the trust and goodwill of the operator.

Topping Up
Lloyd Ventures may have invested in the co-working spaces business, but the fact remains that building and managing space is capital-intensive and not many investors are willing to fund the developers. “The returns one can expect in this business aren’t as high as one can get from successful exits from a mobile business, where it can go as high as 100x. The returns usually vary 20-40 times depending on investment made in the co-working space,” explains Stirring Minds’ Bhatia.

To meet the high cost of investment this business requires, these entrepreneurs have come out with alternative streams of revenue in addition to the fees they charge their users. 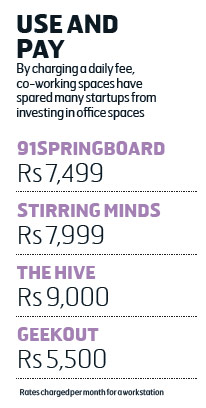 One way is to collect a finder’s fee by connecting freelancers to companies who want to outsource projects or by helping the VCs identify potential startups for funding. Sobin Thomas, founder of Geek Out, a co-working space for techies, with two locations in Mumbai, says most of the revenue that they earn is from the finder fees alone. “In this industry, the finder’s fee varies from anywhere between 5 to 10 per cent depending on the project. There are companies who contact us on a weekly basis for outsourcing the projects. The average cost of these projects is around $4,000 which the developer gets. We charge 5 per cent of the total project’s cost,” he explains.

What makes it easy for space providers is their ready access to the community of freelancers and startsup and also the insider’s information they have about their products and services, talent, etc., information that would interest the venture capitalists intensely. Being able to connect these dots is a win-win for all the entities — more revenue for the operator, the VCs and for the users who get greater exposure and recognition.

Another source of revenue for co-working spaces is through events to provide mentorship, technical skills and networking opportunities to these young companies. The promoters of The Hive see their co-working space as a place that metamorphoses into an events arena in the evening for performance artists, stand-up comedians, or music groups. “What we are trying to do is build the business model focused on where the maximum returns are. So, we have divided this place into a co-working space during the day and for hosting events at night for full utilisation,” says Sharin Bhatti, co-promoter of The Hive. In fact they designed their three-storied bungalow into a co-working space, a workshop and a cafeteria so there is enough space for all kinds of events — founder-dating events, hackathons, bookkeeping or taxation workshops.

Co-working spaces are trying every trick in the book to create a sustainable business for themselves and a self-sufficient ecosystem for startups. The investment Mitra’s Lead Angel Network made in MyCuteOffice could just be the beginning. If the new approaches enhance the business prospects for these co-working space providers, the target of future investments could well be these brick and mortar co-working space entities themselves instead of online portals. If WeWork, a New York based shared office space provider can raise its fourth round of funding of $355 million in December 2014, can Indian players be far behind?