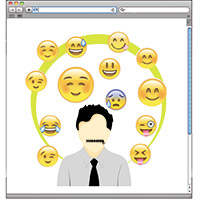 But by all accounts, it appears that people are seeking simplicity in online social interactions. Why else would we have apps like ‘Yo’ that do nothing but let users send ‘Yos’ to friends? In fact, there are several clones of this app, including an Indian version that has twisted ‘Yo’ to ‘Aiyyo’ for good measure.

Perhaps the next step is to omit words altogether. A new social network launching soon will apparently have users communicate only through emojis. Even user names will be made up of emojis or tiny little emoticons and pictures. You can block your username right now and prepare to join this emoji-only social network, or Emojli as it has been christened. So far 10,000 people have signed up for emoji-only user names.

It’s true that that non-verbal communication is really important in real life, so maybe we will increasingly try to find ways to bring it into our online interactions.

On the other hand, the founders — Matt Gray and Tom Scott — could just be having fun, riding the wave of silliness that hits the social web at regular intervals.

Coming to iOS first: brace for it.

Stitching Up Funds
Fashion-focused social network Roposo.com has raised bridge funding through its existing investors, bringing the size of the total investment close to $1 million. The initial funding was raised from India Quotient, 5ideas and the co-founder of Flipkart, Binny Bansal as an angel investor. The brainchild of three IIT Delhi alumni, Mayank Bhangadia, Avinash Saxena and Kaushal Shubhank, Roposo.com features products and trends that are liked, curated, personalised and updated every day from across online brands and e-commerce portals.

DIG THE DATA
#NaMo Wave
Since his election in late May 2014, PM Narendra Modi (@NarendraModi) has become the third most followed world leader on Twitter, with 5,087,980 followers. He has surpassed @SBYudhoyono (5,08,743), according to Twiplomacy, an annual global study of world leaders on Twitter

Pope Rules
Pope Francis (@Pontifex) is the most influential world leader on Twitter. His Spanish tweets are retweeted more than 10,000 times each on average. In comparison, @BarackObama’s tweets are only retweeted 1,400 times each an average, despite his massive following, according to Twiplomacy

LEADER
Piyush Goyal
@PiyushGoyal
Minister of State for Power, Coal and New & Renewable Energy
Chartered Accountants are the backbone of our financial system and maintain sanctity of all our accounts. Proud to be a CA!