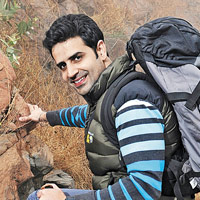 08 November, 2014
Print this article Font size -16+
We expect 2013 to be a great year for travel. While in India travelling to meet friends and family continues to be the biggest segment, increasingly people are taking standalone holidays to explore new destinations. This is likely to grow further. According to me the major trends for the year are as follows:
Social Suggestion
People are progressively using social media to plan their travel. This trend will grow further. Several of our surveys show that while the number one travel-related activity on Facebook is posting pictures, taking an opinion while planning a holiday comes second. Whether it is deciding on a destination, a hotel or an activity, more and more people are going by the opinion of their friends on social media. Our travel app on Facebook called ‘Cities I’ve Visited’ is very popular — 37 million people have used it till now. We launched ‘Instant Personalisation’ some time back where you log in to Tripadvisor via Facebook. So when you search for a place, we are able to show you which of your friends have already been there.
The App Route
Smartphones and mobile applications are the way forward. In the past 18-24 months, the traction on our site via mobiles has more than doubled. While earlier it was 8 per cent, now 18-20 per cent of our traffic is on the mobile and this number is growing at 2x — the rate at which traffic on the desktop website is increasing. The mobile website and app are primarily being used during the holiday to check out restaurants and attractions.
Total Recall
The concept of people using reviews to plan their travel is not a niche concept anymore with a large number of Indian travellers using reviews to plan their travel.
Action-packed
Break As per our latest survey, 40 per cent of respondents said that they have either had an adventure holiday or want an adventure or activity-based holiday. This trend will increase further with a lot of resorts and hotels offering activity-oriented packages.
New Experiences
In our survey, 26 per cent of respondents said they wanted to go on a spa holiday while another 10 per cent wanted to go on a cruise. It’s no longer only about sightseeing, though shopping continues to be the number one activity. Also, domestic holiday destinations of choice are changing. There are several new destinations in the top 20 such as Khajuraho, Coorg and Chikmagalur.
The author is the country manager at TripAdvisor India.