Wired Up For Growth 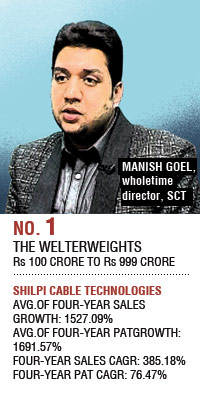 08 November, 2014
Print this article Font size -16+
The quadrupling of the country’s mobile phone subscriber base between FY09 and FY12 has led to Delhi-based Shilpi Cable Technologies (SCT), promoted by Mukesh Gupta, seeing a sharp uptick in revenues. The growth in the demand for telecom cables has spurred this growth. The company went from under Rs 1 crore in revenues in 2007-08 (when it started operations) to over Rs 460 crore in 2011-12. Its profit after tax in 2011-12 was Rs 18.62 crore.

But, the spike in SCT’s numbers was not solely on account of organic growth. In FY12, its revenues doubled after its subsidiary, Shilpi Cabletronics, was merged into it. BW’s calls and emails to chairman-cum-managing director Mukesh Gupta and wholetime director Manish Goel went unanswered.

After the merger, SCT got into manufacturing automobile cables and accessories from another plant at Bhiwadi, Rajasthan. But the demand for RF cables continues to be strong as mobile telephony covers new ground in rural India.
—Anup Jayaram

On A Learning Curve
A company that works towards improving the grades of academically weak students has seen its own grades soar; it has seen a 50 per cent jump in net profits year on year. MT Educare has witnessed a four-year average sales growth of 394 per cent since 2008.

So what worked for it? “First, we have acquired dominant players in some geographies such as Lakshya Forum for Competitions (an IIT coaching institute) and, second, we have tied up with many schools and colleges,” says Chhaya Shastri, director, MT Educare. The tie-ups for infrastructure has brought down costs. “While earlier we would spend up to Rs 30 lakh on a new coaching centre, now it is just a fraction of that sum,” says Shastri.

The company changed the way its coaching classes were held. “In the last four years, we have put in place processes, invested in technology and multimedia classrooms. We have implemented SAP, so that all admissions are reflected real-time at the back-end,” says Mahesh Shetty, chairman, MT Educare.

The innovations found reflection in the returns made by Helix, a PE firm, on its investment in MT Educare. The PE firm which invested $8 million in 2007, made 2.5 times that when it sold most of its stake in the IPO floated by the company in 2012.
— Sachin Dave

A Panacea For All Ailments
seven-year-old drug company Aanjaneya Lifecare is seen as a miniature Ranbaxy or Cipla — with an integrated model, right from bulk drugs to finished formulations. Its revenues were a mere Rs 90 crore, with a Rs 5 crore profit after tax (PAT), in 2008-09. This has grown to Rs 479 crore, with a PAT of Rs 41 crore, by 2011-12, way over the industry average of 15-16 per cent a year.

Kannan Vishwanath, vice-chairman and managing director, says, “In the category of small to medium companies, Aanjaneya’s advantage is that we have established our presence in the entire value chain — from bulk drugs to finished formulations — and that integrated model gives us a competitive edge.”

Another factor behind its growth was the acquisition of Pune-based Phyla Biologicals for about Rs 50 crore in 2010. Phyla, which is now fully integrated with Aanjaneya, specialises in cough and cold preparations and herbal products, with over 250 finished formulations.

Currently, 40 per cent of Aanjaneya’s sales are of bulk drugs. Anti-malarial drugs are its major revenue source, contributing 35 per cent. Of the total revenues, 20 per cent are from exports. In 2011, the company went public and raised Rs 100 crore. Anjaneya earns 30 per cent of its revenues through contract manufacturing.

Next up: entering the US and European markets. Besides, Aanjaneya is planning an acquisition in central Europe.
— P.B. Jayakumar