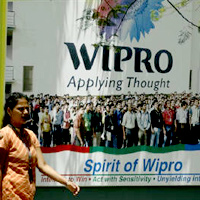 22 January, 2015
Print this article Font size -16+
India's third-biggest software services company Wipro reported a near 9 per cent rise in third-quarter profit on Friday (16 January), slightly ahead of analysts' forecasts, helped by a rise in clients' technology spending.
The company also said it had appointed Jatin Dalal as chief financial officer after announcing the retirement of Suresh Senapaty from the post.
For its third quarter to December 31, Wipro made Rs 2193 crore ($354.6 million) in net profit, compared with Rs 2015 crore in the same period the previous year.
The average forceast from analysts was a profit of Rs 2145 crore, according to Thomson Reuters.
Total revenue rose to Rs 12,085 crore, from Rs 11,327 crore a year earlier.
Wipro, India's third-largest IT services exporter, expects higher technology spending by western clients to boost sales in its next fiscal year, it said after posting forecast-beating quarterly profit on Friday.

About three quarters of the company's revenue is derived from businesses in the United States and Europe, which Wipro says are beginning to reinvest in technology to cut costs and boost efficiency, though it said demand from energy companies could be at risk because of plunging oil prices.

Global IT spending will touch $3.8 trillion in 2015, a rise of 2.4 per cent on last year, research firm Gartner said on Monday, though that was down on an earlier projection of 3.9 per cent because of a strengthened dollar.

For Wipro, meanwhile, oil prices cast a shadow over its forecasts, with Kurien saying that the company could start to feel the knock-on effects after about two quarters.

Energy companies including BP, which Wipro counts as a client, ConocoPhillips and Schlumberger have cut jobs because of oil's 60 percent price slump since June.

Wipro, which added 44 clients in the December quarter, makes about 17 percent of its revenues from the energy sector, against roughly 5 percent at both Tata Consultancy Services and Infosys.

"In the short term there will be a blip, but in the long term there won't be an impact," Kurien said.