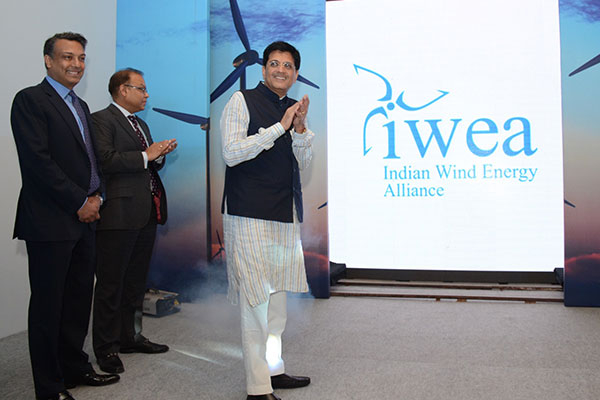 08 December, 2014
Print this article Font size -16+
Hoping to boost the the wind energy sector in India, private players from different segments of the wind industry, have come together and launched the Indian Wind Energy Alliance on December 3, 2014.

Bringing together the existing manufacturers and project developers’ associations, the Indian Wind Energy Alliance, (IWEA) aims to promote the interests of all stakeholders in the sector. The IWEA was launched by Piyush Goyal, Minister Power, Coal and New & Renewable Energy, and is a consortium of the Indian Wind Turbine Manufacturers Association (IWTMA) and the Wind Independent Power Producers Association (WIPPA). At the launch, Piyush Goyal cited PM Modi’s vision of providing power to all by 2019 and said: “There is need to enhance wind power development in the country, and the government will provide all the necessary support to the industry to achieve the target of 10,000 MW of wind power installations every year.” He also said the IWEA will be helpful to all and not wind energy project developers or wind turbine manufacturers alone, as it brings together various stakeholders.

The alliance is to be chaired by Sumant Sinha, who is also the CEO and chairman of ReNew Power Ltd and vice chaired by Madhusudan Khemka, also the Managing Director of ReGen Powertech Ltd.  Sinha believes, “the potential of the wind sector in India is far greater than what is currently being projected.” According to him, the formation of IWEA will provide an impetus to the wind energy industry by establishing and assisting scientific laboratories, workshops, institutes and organization in the Wind Energy Industry. At the launch, Madhusudan Khemka said: “Wind energy is poised to contribute substantially to India’s energy security, considering its generation has almost tripled during the last 6 years.” He added that the IWEA will be working with communities, governments and member organisations to ensure that the national ambitions are realized. Khemka says the formation of this apex body will also attract more private sector investments.”

During the 11th Five Year Plan, the wind energy market attracted private sector investment worth Rs 44,000 crore  and is said to have helped in reducing 68 million tonne of carbon emissions. As per an EY India report, wind power helped save 41 million tonnes of coal imports during the 11th Five Year Plan, leading to an estimated forex savings of Rs 19,800 crore. India is the fifth largest wind energy producer in the world but only generates around 6 per cent of the total wind power globally. Total installed wind power capacity worldwide in FY 2013-14 was 3,21,559 MW (end of 2013) of which India had 20,215 MW installed capacity.

Only time will tell how effective this alliance is to be and what it can achieve in terms of improved wind power production. However, the positioning of comparatively lesser known players of the wind market speaks of changing trends in the sector. It would appear gone are the days of Suzlon Energy Ltd and Muppandal Wind, who own the largest wind farms in the country approximately 1500 mw each. Both chairman and vice-chairmen of IWEA represent companies that are not the names that pop up at the mention of wind energy players of India.