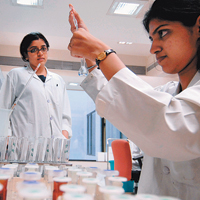 Mumbai-based Sun Pharmaceutical Industries' patent dispute settlement with US-based MedImmune Inc. on a generic version of the cancer drug Ethyol shows how innovators and generic drug makers alike can misuse a system that was set up in the US to bring cheaper drugs to patients. While both the companies will benefit from the deal — Sun can continue to sell the only generic version of Ethyol and MedImmune's patents are upheld — the only loser is the patient.

The settlement means that no other company will be able to market another generic version of the cancer drug — that would have brought prices down for patients — until MedImmune's patents expire.  Ethyol recorded sales of $80 million in the US in 2007, according to IMS Health, a pharma market research firm.

Sun Pharma had applied for marketing approval for a generic version of Ethyol — known under its generic name as amifostine — on the grounds that MedImmune's patents were unenforceable. Given that MedImmune has now agreed to licence out the patents to the Sun Pharma, allowing it to continue marketing the drug, the Indian company may have been right.