Will The Marriage Work? 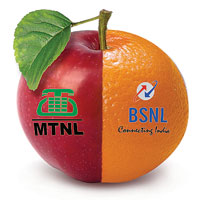 08 November, 2014
Print this article Font size -16+
After being planned for years, the merger of state-owned telecom operators Bharat Sanchar Nigam (BSNL) and Mahanagar Telephone Nigam (MTNL) is finally going to happen. The Modi government is looking to complete the process by mid-2015.

But, will the merger work? There are several issues that need to be sorted out for the merger to work.

There is great opposition to the merger within BSNL, where the employees are opposed to the corporatisation of the entity.

For this merger to work, the government first needs to get the employees on board. This is what the HR managers in both operators are working on.

Meanwhile, MTNL has proposed selling a 50 per cent stake in its subsidiary Millennium Telecom to BSNL as part of the government’s Digital India plan. The idea is to unlock efficiency since Millennium Telecom will have a marginal licence fee payout since it is not a licensed telecom operator.

It remains to be seen if this government can manage to do something that others have failed to do. But for the new entity to succeed it needs functional autonomy. Will DoT allow that?