Will Govt Bite The Bullet? 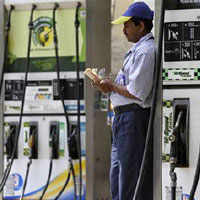 08 November, 2014
Print this article Font size -16+
The cabinet headed by Prime Minister Manmohan Singh may discuss raising the prices of heavily subsidised fuels including diesel at a meeting on 13 September and could take a decision, government officials told Reuters.

Meanwhile, a private TV channel reported that the finance ministry has proposed a minimum hike of Rs 4 per litre of diesel and Rs 100 per cylinder of cooking gas (LPG).

No hike has been proposed in the prices of PDS kerosene, they added.

New Delhi subsidises the prices of diesel, cooking gas and kerosene to dampen inflation and protect the poor, a popular policy that has nevertheless put a severe strain on public finances.

While the issue is not on the committee's agenda, it will likely be discussed, three officials said. The meeting of the Cabinet Committee on Political Affairs is due to take place at 6:30 p.m.

A meeting of the full cabinet is scheduled for 14 September, where other ways of reviving the economy are to be discussed, including a proposal to allow foreign airlines to invest in domestic carriers. The rising bill from the fuel subsidy and the resulting strain on public finances have put India's investment grade credit rating in peril.

However, fears of a political backlash mean pump prices have remained unchanged for more than a year. A price increase will almost certainly trigger street and political protests ahead of state elections.

The government acknowledges a price hike is essential for curbing the fiscal deficit, a pre-condition for reviving growth in Asia's third largest economy.

A price increase will also aggravate inflation, as costs, such as road freight rates, will rise.

Analysts estimate a Rs 5 increase in diesel prices, which now stand at Rs 40.91 per litre, will add 0.5-0.8 percentage points to headline wholesale price inflation, currently a little below 7 percent.