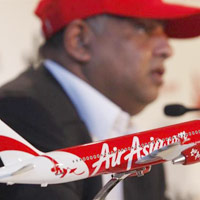 08 November, 2014
Print this article Font size -16+
Civil Aviation Ministry will clear the application of Air AsiaIndia to launch its operations in the country as soon as it submits all the required data,Civil Aviation Minister Ajit Singh said on Friday, 3 May 2013.

He also suggested that the proposed airline, a joint venture between Malaysian airlines Air Asia, the Tatas and Telstra Tradeplace of Arun Bhatia, would save time if they also named the CEO of the company soon.

"They (Air Asia) have just submitted the application. The Ministry is looking at it. When all the data is there, I can tell you, the Ministry is very active, proactive. If we get all the required data it should be cleared very soon," Singh said.

He was asked whether the Ministry has fAir Asiaound any problem with Air Asia India's application as it has been a week since they submitted the proposal.

On whether the Ministry has sought more data from Air Asia, Singh said, "I saw in the papers that the CEO's name was not there. So, asking that is really helping them because they have to go through the security clearance. If they reply, that will save time later on, otherwise it will pull on."

He was interacting with reporters after announcing the schedule of the 'India Aviation 2014' - a 5-day exhibition and airshow on the civil aviation sector - to be held in March next year at Hyderabad.

"Demands have come from various countries. With Oman, we have discussed. Singapore we have concluded. We have done it with Abu Dhabi. Other countries have also asked and we are looking into it. There was lot of discussion about this," he said.

During the last one and half years, 80,000 seats were allocated to Indian carriers for their operations in Gulf countries and Singapore, Singh said.

"The way this sector is going to grow, we saw that last month, there was a seven per cent increase in the passengers ... in the international traffic. I think we need a lot more bilaterals," he said.

Asked whether any more bilateral agreements were in the pipeline with Middleastern countries, Singh said, "Lot of countries have requested and we will look at all of them."

On the revival plan submitted by the Vijay Mallya-owned Kingfisher Airlines, he said the proposals have not yet satisfied the DGCA.

"The DGCA has to be satisfied that Kingfisher can have a safe and sustainable operation. So far they have not given a plan which DGCA considers safe and sustainable... What I have seen is that the DGCA said that it is not a complete revival and not a satisfactory revival plan," he said.