Will Brands Score A Six At IPL 6? 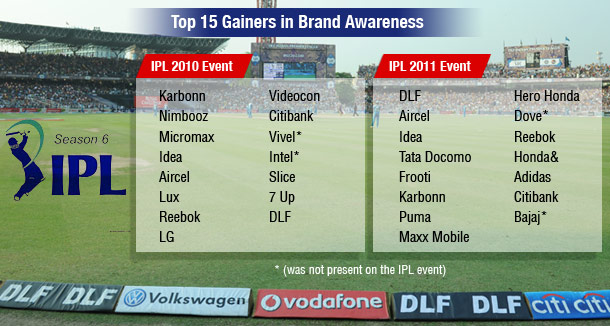 08 November, 2014
Print this article Font size -16+
The sixth edition of the Indian Premier League is a few days away – and although the organisers are still at sixes and sevens with the Tamil Nadu government, which has raised the political bogey to queer the sporting pitch, brands are getting into the field hoping to score a six!

Last year, the high television ad rates during IPL telecast saw many a brand staying on the sidelines resulting in unutilised inventory. It also led to a lower rating for India’s biggest sporting property as a whole.

This year, things appear to be looking up for the business of IPL. Media buying and planning agency MEC India and WPP’s analytics company Meritus in a joint study has forecast that TV rating for the season will perk up from 3.8 last year to 3.9.

Another study called CRIC (Consumer Response to Investment in Cricket) conducted by Domor Communication Consulting and powered by media buyer Vivaki Exchange is a bit more circumspect – forecasting that ratings will remain stable or show a marginal increase. The study was conducted on the basis of an audience survey (10,000 strong with a 60:40 male is to female ratio) and merging it with a study of ratings.

On the whole, however, the CRIC study suggests a good season for brands at the IPL (a good IPL season is classified as a year of higher average television viewer ratings (TVR) while a poor season has lower than average TVRs).

Reach and salience are the two biggest things that brands are looking for in IPL associations, says Mona Jain, CEO Vivaki Exchange, which is one of the biggest media buyer for IPL.

So how effective has the IPL property been for brands in this respect?

According to Jain, telecom brands have scored well on the IPL pitch. “FMCG brands don’t typically see as much value. But consumer durables brands, telcos, and banks have been able to build a whole campaign thanks to the pan Indian high reach of the property – especially with male and youth audiences,” she says.

Marketing consultant Lloyd Mathias of Greenbeam Ventures which advises telecom start ups feels that IPL is the perfect platform for telecom brands because it offers a ready connect with the relatively younger, urban, male dominated audience who are the primary driver of telecom ARPUs (average revenue per user). “The IPL provides a cost effective platform to build both reach and salience with this vital segment,” he says.

Also it helps that category definitions in telecom tend to be less stringent than say beverages, points out Mathias. So while a Vodafone can come in as a primary sponsor as a mobility service; a Tata Docomo can also be an associate sponsor on the back of the Tata Photon wireless broadband service and yet advertise the Tata Docomo Mobility service. Similarly, Airtel could become an associate as a DTH provider. This, besides the fact that other mobility providers — Idea, Uninor, Reliance, MTS — can also buy TV spots- within a limit.

According to Vivaki’s Jain, short burst (just six weeks) though the IPL season is, it's actually now where a bulk of the marketing monies of several brands is going in. “Brands are putting as much as 35 per cent to 50 per cent of their annual marketing spends on IPL. They find that if you plan it well, and amplify presence through various social media, it pays off pretty well, says Jain.

The CRIC study analyses effectiveness of brand performance on the IPL pitch. Interestingly, the survey points out that 13 out of the Top 15 gainers in brand awareness during the IPL 2010 event period were on the IPL while 12 of the top 15 gainers were on the IPL during the 2011 event period– implying that being present on the IPL brings the brand into the consumer’s memory far better than any other media property during that period.
Significantly, the study points out that a mega event prior to IPL has an impact on effectiveness. For instance, when the ICC world Cup preceded the IPL, that played a role.

And what is the likely impact of IPL6 going to be on brands? The study says that “In the absence of a mega event like the ICC Cricket World Cup before the IPL 2013, brands will not enter the IPL with very high awareness levels, leaving such brands to show a higher gain in awareness by the end of the tournament.”  It has stuck out its neck and given some estimates too