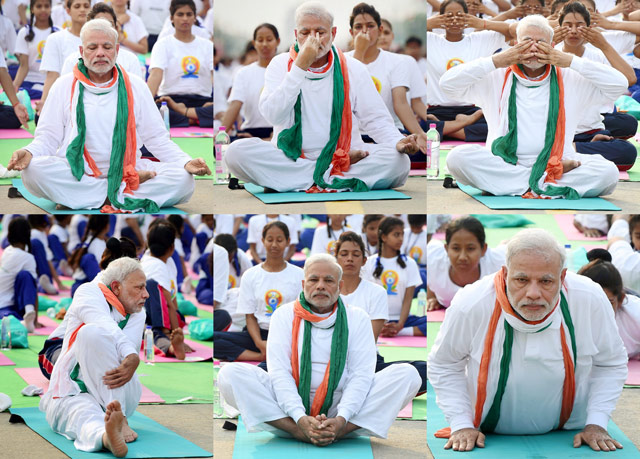 Not everyone welcomed Prime Minister Narendra Modi's yoga show. Critics are of the view that the scale and ambition of the International Yoga Day celebrations — from an attempt to make it to the Guinness World Records to coaxing 192 nations to host similar events — are far removed from the concept of yoga as it originated in India.

Political opponents also alleged that Narendra Modi’s game plan was to divert attention from real issues as he failed to speak out about more serious matters. These include allegations of corruption against his foreign minister Sushma Swaraj and Bharatiya Janata Party’s Rajasthan chief minister Vasundra Raje Scindia. They appear to have aided a family friend, Lalit Modi, who had fled India ahead of questioning over corruption.

The united Opposition has showed its readiness to paralyse Parliament's monsoon session next month in the hope it would compel the Prime Minister to act. Congress vice president Rahul Gandhi is said to be in no mood for compromise and has asked for this battle to be taken its logical conclusion, no matter what the losses and gains in the final count.

At this juncture, the forthcoming Bihar elections are of utmost importance for the future growth of the saffron party across the country. A grand performance of the party in Bihar would determine the BJP's political trajectory in the coming years. BJP president Amit Shah participated in the yoga practice in Patna with other veteran BJP leaders. With an eye on year-end elections, Patna is certainly the most important venue for the BJP leaders with worldwide yoga practice certainly giving it a political boost.

The ruling Janata Dal (United) has, however, accused the BJP of using yoga as a political tool. Several JD (U) leaders maintained that an impression was being created among people that Modi had played a big role at the international level in getting yoga recognised at the international-level, which was not the case.

The opposition alleged that Modi-led government created the hype around the event to divide society and divert attention from its ‘misdeeds, scandals and failures’. Rashtriya Janata Dal boss Lalu Prasad, who has been leading the charge against the BJP in Bihar after joining hands with Chief Minister Nitish Kumar, criticised the BJP for diverting the minds of the people from governance to yoga. He also said the BJP has hyped the International Yoga Day celebrations just to deflect attention from the controversies that have come to besiege its government.

At present, Lalu supports Sushma, but might start attacking Modi later. The Lalit Modi sordid saga will be directly linked to Narendra Modi. This attempt to save and help a man who is allegedly involved in the black money issue will cost the BJP dearly, and its edge to attack Lalu will weaken too.

According to media reports, the Rashtriya Swayamsevak Sangh (RSS) turned to yoga for laying the groundwork for the BJP ahead of the Assembly polls in the state. The RSS workers met people and asked them to join June 21 special camps to mark the International Day of Yoga. While all political parties rely on their grassroots workers to mobilise people, the RSS programme was well placed to help the BJP garner support in the Assembly elections.

Although the programmes were being projected as apolitical, not aimed to serve any particular political party, the timing indicates otherwise. Analysts say that the timing of the programmes was such that people could be moulded towards the BJP's agenda ahead of the polls likely to be held in September-October. The RSS move was to help the BJP in Bihar was part of a grand design to strengthen Narendra Modi's hands.