Why The Greek Crisis May Help India 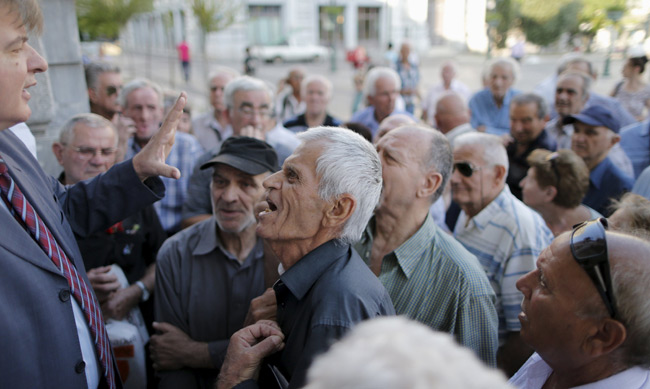 The markets may be jumpy and the rupee jittery to start with, but the Greek crisis offers some opportunities for India as well, writes Nandini Sanyal

The Indian markets had reacted to Greek no to the EU rescue package with a profound plunge on Monday (6 July). But soon enough, the market started recovering and by by 2 pm, had  clawed back most of the lost ground and lo, by the end of the day, had jumped 116 points up. The government of India asserted that India is well insulated from the crisis but rupee may be affected due to the outward flight of investment.

"We will have to see how the euro moves now. We are closely monitoring the Greece situation. There could be some reaction on the Fed rate hike likely," he said."Greece crisis might impact India indirectly," he added without elaborating.

Oil, Commodity Prices To Fall
Oil prices fell sharply on Monday after Greece rejected debt bailout terms and as China rolled out emergency measures to prevent a full-blown stock market crash, adding to worries about poor demand growth at a time of global oversupply.  A strong dollar tends to pressure commodities as it makes fuel more expensive for holders of other currencies.

Commodities were also sucked into market turmoil that has seen Chinese shares fall as much as 30 per cent since June due in part to an economy that is growing at its slowest pace in a generation. Chinese brokerages and fund managers have agreed to buy massive amounts of stocks to support markets, helped by China's state-backed margin finance company, which in turn would be aided by a direct line of liquidity from the central bank.

But for India, low oil and commodity prices are good for Indian economy and just may bridge the fiscal deficit.

Indian Economy May Just Gain
Falling oil and commodity prices will help the Indian economy.  A weaker rupee will also mean exports may go up, especially in case of IT.

"This is a drama which is going to play out for sometime. We are well protected in at least three ways. Our macro- economic situation is much more stable. We have (forex) reserves. We are an economy which is still a very attractive investment destination. So I think we are relatively well insulated," said Chief Economic Advisor Arvind Subramanian.

"As for the crisis itself, it is going to going to be long and prolonged. Tomorrow is a big meeting of the German and the French head of the states. Let's see, it is up to Europe to respond," he said. On the likely impact of the crisis on Indian economy, he said, "In these situations what mostly happens is there is flight to dollars, to a safe haven. Rupee might also be affected by that. But nothing gets unusual at all so far."

"We have been saying for months now, India has nothing to worry about, this is a European problem," said G. Chokkalingam, founder of Equinomics, a Mumbai-based research and fund advisory firm.

If Markets Fall, Right Time To Bottom-fish
As everybody knows, the best time to buy in the markets is when the prices are down. That way lies profit. India's stock markets fell more than one per cent early on Monday, heading towards their biggest daily fall in nearly a month, as blue-chip stocks such as ICICI Bank Ltd declined on risk aversion linked to Greece, while IT stocks such as Infosys Ltd fell on caution ahead of quarterly earnings.

Asian stocks hit a six-month trough and the euro stumbled after a Greek vote against austerity measures endangered its future in the single currency and raised the risk of a full-blown crisis in the euro zone.

Even as I write, the market keeps improving, probably because the punters are picking up stocks at rock bottom prices. So a win -win for all.

Take The Chance To Cherry Pick Good Cos Of Great Vintage In Europe
As the situation turns stormy in Greece, many companies may be will downing shutters and be open to buying for a reasonable cost.  India missed a similar chance in the early 2000s. China took the chances and by 2014, had invested $14 billion in Greece. May be this time, Indian entrepreneurs can fish in troubled waters.